Not Just for Trayvon 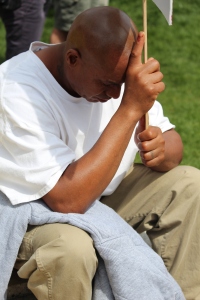 Bo Morrison's father pauses for a moment at a rally in memory of his son and Trayvon Martin. Photo by Callen Harty.

Today in Madison, Wisconsin there was a rally with hoodie sweatshirts, the now-ubiquitous symbol for the loss of an innocent life to a warped sense of vigilante justice.  But here it was not just about Trayvon Martin, the 17 year old killed by a community watchman in Florida.  Here, we also honored the memory of Bo Morrison, a 20 year old killed by a man in Slinger, Wisconsin at the beginning of March.

Morrison had been at a party where some underage attendees were drinking.  When the police broke it up kids ran in all directions.  Morrison, trying to hide from the police, stepped onto the back porch of a nearby house.  The owner of that house, Adam Kind, got his gun and unlocked the door to the porch when the police were only a block away, having been called by him to the party.  When Morrison stepped out of the darkness and lifted his hand Kind shot and killed him.  Nobody else was on the porch, so all we have is the homeowner’s words that he felt threatened.  According to Wisconsin’s new Castle Doctrine law, that is all he needs as a defense.  The law doesn’t require the homeowner to retreat if s/he can.  Kind has not been arrested and the district attorney has indicated no charges will be filed against him.  The law was only signed into law in December of last year.

Perhaps Kind felt threatened.  Perhaps he will suffer the rest of his life in guilt for taking the life of a young man who was simply hiding from the police after running from a party, something thousands of youth have done.  Perhaps he was itching to use his gun in self-defense after passage of the Castle Doctrine.  We will never know. What we do know is that Wisconsin’s Castle Doctrine and Florida’s Stand Your Ground laws make it all too easy to shoot first and ask questions later.  When Colorado passed a similar law back in 1985 they dubbed it the “Make My Day” law, a reference to the Clint Eastwood movie.  It also implied a sense of vigilante justice–push me too far and I will kill you–“Go ahead, make my day.”  That is the reality of what these laws are about.  They aren’t designed to protect people.  They are designed to kill people.

According to some recent Google research by Kali Akuno and Arlene Eisen at least 29 young African-Americans (28 men and 1 woman) were killed by police, security personnel, or self-appointed “keepers of the peace” since January 1 of this year.  These are just the ones they were able to find with a quick Google search and they only looked at the first 65 of 712,000 pages.  It also does not count every case of vigilante justice, non-police or security-related deaths, or other unreported ones.  And these are just the legal killings of young blacks in three months in this country.  That’s ten a month, two to three a week.

We cannot continue down this path.  We cannot allow the lives of our youth to be extinguished so easily.  We must make a stand for peace and justice before there is no peace and justice left.  It appears likely that there will be an attempt to repeal the Castle Doctrine in Wisconsin, but the chances for success don’t appear the best right now with a Republican-controlled Assembly, Senate, and Governor.  Even if the Governor is unseated in his recall election and the Senate control reverts to Democrats the Assembly will still be solidly in Republican control.  Pressure needs to be put on supporters of the law to change their minds, hearts, and votes and that will likely not be enough either.

Maybe when a sixteen year old white kid dies at the hands of someone who feels threatened our legislators will take another look.  Maybe when an old woman is shot by mistake as she enters her own child’s house.  Maybe when too many lives have been lost.

Bo Morrison was one life too many to lose.  For Bo’s sake, let’s repeal this law now.

Originally from Shullsburg, Wisconsin Callen Harty is the author of four books and numerous published essays, poems, and articles. His most recent book is The Stronger Pull, a memoir about coming out in a small town in Wisconsin. His first book was My Queer Life, a compilation of over 30 years worth of writing on living life as a queer man. It includes essays, poems, speeches, monologues, and more. Empty Playground: A Survivor's Story, is a memoir about surviving childhood sex abuse. His play, Invisible Boy, is a narrative with poetic elements and is also an autobiographical look as surviving child sex abuse. All are available on Amazon.com (and three of them on Kindle) or can be ordered through local bookstores, He has written almost two dozen plays and 50 monologues that have been produced. Most of them have been produced at Broom Street Theater in Madison, Wisconsin where he started as an actor, writer, and director in 1983. He served as the Artistic Director of the theater from 2005-2010. Monologues he wrote for the Wisconsin Veterans’ Museum won him awards from the Wisconsin Historical Society and the American Association of State and Local History. He has also had essays, poems, and articles published in newspapers and magazines around the country and has taken the top prize in several photo contests. His writing has appeared in Out!, James White Review, Scott Stamp Monthly, Wisconsin State Journal, and elsewhere. He has had several essays published online for Forward Seeking, Life After Hate, and The Progressive. Callen has also been a community activist for many years. He was the co-founder of Young People Caring, UW-Madison’s 10% Society, and Proud Theater. He served as the first President of Young People Caring and as the Artistic Director for Proud Theater for its first five years. He is still an adult mentor for the group. In 2003 he won OutReach’s Man of the Year award for his queer community activism. OutReach is Madison, Wisconsin’s lesbian/gay/bisexual/transgender community center. He also won a Community Shares of Wisconsin Backyard Hero award for his sex abuse survivor activism work. He has been invited to speak before many community groups, at a roundtable on queer community theater in New York City, and has emceed several events. In 2016, Wisconsin Coalition Against Sexual Assault named him their annual Courage Award winner for his activism, writing, and speaking on sexual assault.
View all posts by Callen Harty →
This entry was posted in Uncategorized and tagged Bo Morrison, Castle Doctrine, Hoodie rally, Make My Day law, Stand Your Ground, Trayvon Martin, vigilante. Bookmark the permalink.