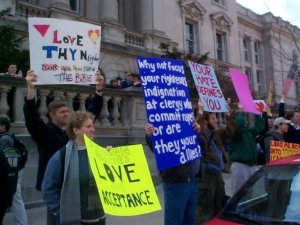 Counter protesters hold signs across the street from Fred Phelps and his group of hate-filled followers during a rally in Madison, Wisconsin. This is the group that has gained notoriety for protesting the funerals of fallen soldiers among others. Photo by Callen Harty.

On Friday members of Fred Phelps’ Westboro Baptist Church are scheduled to be in my city for a protest at the courthouse.  A counter rally is scheduled to greet them.  Pretty much everywhere they go around the country they are met with counter protesters.

The organization has gained notoriety for protesting at funerals and other places and for their hate-filled rhetoric, such as signs that say “God Hates Fags”.  They don’t just come to a place to protest something peacefully, they come with incendiary signs and rhetoric and spew hatred, leaving its corrosive influence behind them.

Whenever these groups intrude themselves into my world, whether it is neo-Nazis, the Westboro Baptist Church, or others who carry hate-filled messages I struggle with what to do as a reaction.  I am a Bill of Rights purist and I absolutely believe that they have the right to peaceably assemble and they have the right of free speech.  In fact allowing them to speak is usually the best way to show how warped their ideas are and to expose them for what they are.  I believe they have the right to say things that are ugly, wrong, or just plain stupid.  On the other hand members of the community have the same right to peaceably assemble to speak out against them and to demonstrate that hate is not welcome here.

I understand that they are looking for attention and that they gain something when there is a large reaction, especially if it is negative or violent.  In fact Phelps’ group has a reputation for inciting people in hopes of getting a reaction so that they can then turn around and sue.  I don’t know if it’s true or not but I have heard it often.  I understand that ignoring them may be the best thing to do.

On the other hand it is difficult to ignore them coming into my town and my conscience pricks me into action.  It tells me that I need to be there and to counter their hatred in some way.  What I don’t want to do is to go there and scream at them, swear at them, and bring myself down to the same level of venom and hatred.  I want to counter their hatred with love.  I want them to know that their hateful ways are not welcome in my community, but I can only do that by being present in love and compassion.

In Madison tomorrow Phelps’ followers are coming to support a minister who was convicted and sentenced to two years for encouraging child abuse through corporal punishment, instructing his parishioners to use wooden dowels when punishing children.  According to the Westboro Baptist website, “you have a corrupt judicial system that loves to turn over children to fag & dyke couples, while putting preachers in jail when they say you should spank a child.”  Again, they have the Constitutional right to protest that decision in a peaceful assembly.  The problem is they do not just stop at that.  Instead they bring hateful signs against gays, Jews, believers of Islam, and others.

Faced with this dilemma a lot of communities that have dealt with this group over the last several years have chosen to counter the hate with love and generosity.  I have heard of communities taking up collections for gay causes when the group has come to protest against LGBT citizens.  Because they are essentially coming here in support of child abuse the counter rally is intended to use their appearance in a positive way.  There will be a rally, but there will also be a collection of food, toys, and school supplies which will be given to needy children.  This is the kind of positive love-filled way with which hatred can be met and the way it can be defeated.

My hope is that the counter protesters all understand the purpose of the food drive and that hate can be won with love, not with more hate.  If hate is not welcome here, then we can’t let hateful people drag us down into it.  We must be there fully in love and peace.  I look forward to welcoming them so warmly they may never want to come back.

Originally from Shullsburg, Wisconsin Callen Harty is the author of four books and numerous published essays, poems, and articles. His most recent book is The Stronger Pull, a memoir about coming out in a small town in Wisconsin. His first book was My Queer Life, a compilation of over 30 years worth of writing on living life as a queer man. It includes essays, poems, speeches, monologues, and more. Empty Playground: A Survivor's Story, is a memoir about surviving childhood sex abuse. His play, Invisible Boy, is a narrative with poetic elements and is also an autobiographical look as surviving child sex abuse. All are available on Amazon.com (and three of them on Kindle) or can be ordered through local bookstores, He has written almost two dozen plays and 50 monologues that have been produced. Most of them have been produced at Broom Street Theater in Madison, Wisconsin where he started as an actor, writer, and director in 1983. He served as the Artistic Director of the theater from 2005-2010. Monologues he wrote for the Wisconsin Veterans’ Museum won him awards from the Wisconsin Historical Society and the American Association of State and Local History. He has also had essays, poems, and articles published in newspapers and magazines around the country and has taken the top prize in several photo contests. His writing has appeared in Out!, James White Review, Scott Stamp Monthly, Wisconsin State Journal, and elsewhere. He has had several essays published online for Forward Seeking, Life After Hate, and The Progressive. Callen has also been a community activist for many years. He was the co-founder of Young People Caring, UW-Madison’s 10% Society, and Proud Theater. He served as the first President of Young People Caring and as the Artistic Director for Proud Theater for its first five years. He is still an adult mentor for the group. In 2003 he won OutReach’s Man of the Year award for his queer community activism. OutReach is Madison, Wisconsin’s lesbian/gay/bisexual/transgender community center. He also won a Community Shares of Wisconsin Backyard Hero award for his sex abuse survivor activism work. He has been invited to speak before many community groups, at a roundtable on queer community theater in New York City, and has emceed several events. In 2016, Wisconsin Coalition Against Sexual Assault named him their annual Courage Award winner for his activism, writing, and speaking on sexual assault.
View all posts by Callen Harty →
This entry was posted in Uncategorized and tagged compassion, counter protest, courthouse, Fred Phelps, hate, love, Madison, protest, rally, Westboro Baptist Church. Bookmark the permalink.