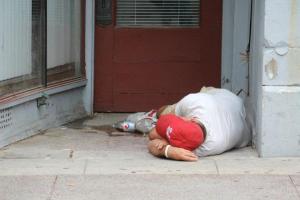 A man sleeping in the doorway of a business in downtown Madison, Wisconsin. Photo by Callen Harty.

Today I saw a sight that ripped straight to the core of my humanity.  In a steady rain an apparently homeless woman walked down the driveway from the Wisconsin State Capitol.  At the bottom of the driveway she stopped, then knelt down almost as if in prayer.  For a moment I thought she may be ill.  Then she bent down and reached her cupped hands into a large puddle next to the drain in the curb, started splashing water on her black pants, and rubbed her legs fervently, washing away accumulated dirt with the fresh rainfall.  After a short time she stood up and continued walking up the street.

In the shadow of the Capitol, with its granite dome and carved statuary, across the street from the elegant Grace Episcopal Church, where night after night scores of homeless men wait in line for hot meals, surrounded by fancy shops and restaurants, this woman had the dignity to use fresh rainwater to try to clean her pants.

In the shadow of that Capitol I stood transfixed and deeply saddened by the poverty in our country.  But our poverty is not for lack of wealth.  If we are not the richest country in the world any more we still rank among them.  Our nation’s poverty is a poverty of spirit.  It is a poverty of empathy.

There are hundreds of thousands of homeless people in the United States.  According to recent reports there are many more empty houses than homeless people–six or seven houses for each homeless person, depending on the source.  Yet they remain empty while familes stand in line for a place to sleep each night, food pantries struggle to feed everyone who is hungry, and women wash their clothes in the street.

It is not just the houses that are empty in this country.  It is the souls of those who accumulate massive wealth that could feed all who hunger and those who okay the spending of billions upon billions of dollars in unending wars while children go without basic necessities like shelter and clothes.  Where are our priorities?  Where now there is greed and neglect there should be sharing and compassion.  This is what a society means.  It is incumbent upon us as a people to care for our brothers and sisters.  We must look inside ourselves and find more ways of doing just that.  If losing empathy is the key to the American dream then we should sleep no more.

Tonight I let the rain fall upon me, and try to cleanse my soul.

Originally from Shullsburg, Wisconsin Callen Harty is the author of four books and numerous published essays, poems, and articles. His most recent book is The Stronger Pull, a memoir about coming out in a small town in Wisconsin. His first book was My Queer Life, a compilation of over 30 years worth of writing on living life as a queer man. It includes essays, poems, speeches, monologues, and more. Empty Playground: A Survivor's Story, is a memoir about surviving childhood sex abuse. His play, Invisible Boy, is a narrative with poetic elements and is also an autobiographical look as surviving child sex abuse. All are available on Amazon.com (and three of them on Kindle) or can be ordered through local bookstores, He has written almost two dozen plays and 50 monologues that have been produced. Most of them have been produced at Broom Street Theater in Madison, Wisconsin where he started as an actor, writer, and director in 1983. He served as the Artistic Director of the theater from 2005-2010. Monologues he wrote for the Wisconsin Veterans’ Museum won him awards from the Wisconsin Historical Society and the American Association of State and Local History. He has also had essays, poems, and articles published in newspapers and magazines around the country and has taken the top prize in several photo contests. His writing has appeared in Out!, James White Review, Scott Stamp Monthly, Wisconsin State Journal, and elsewhere. He has had several essays published online for Forward Seeking, Life After Hate, and The Progressive. Callen has also been a community activist for many years. He was the co-founder of Young People Caring, UW-Madison’s 10% Society, and Proud Theater. He served as the first President of Young People Caring and as the Artistic Director for Proud Theater for its first five years. He is still an adult mentor for the group. In 2003 he won OutReach’s Man of the Year award for his queer community activism. OutReach is Madison, Wisconsin’s lesbian/gay/bisexual/transgender community center. He also won a Community Shares of Wisconsin Backyard Hero award for his sex abuse survivor activism work. He has been invited to speak before many community groups, at a roundtable on queer community theater in New York City, and has emceed several events. In 2016, Wisconsin Coalition Against Sexual Assault named him their annual Courage Award winner for his activism, writing, and speaking on sexual assault.
View all posts by Callen Harty →
This entry was posted in Uncategorized and tagged Capitol, clothes, empathy, Grace Episcopal Church, humanity, hunger, Madison, poverty, society, wealth, Wisconsin. Bookmark the permalink.