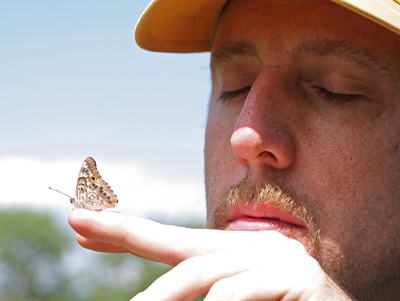 Brian with a Butterfly. Photo by Callen Harty.

When I was younger there was a series of cartoon posters of a sweet-looking and nude straight couple (with their privates always carefully concealed) that always had the phrase, “Love is . . .” followed by some inane platitude. The sayings generally had nothing to do with love at all, but with someone’s apparent obsessions. They included such things as “Love is . . . not dropping litter,” “Love is . . . not putting your feet on the seats,” etc. Seriously. I’m not making these up–these two examples are from the real posters. They apparently sold very well, as they were ubiquitous back then, particularly in the lockers and bedrooms of junior high and high school girls. Maybe the reason for the success of these posters is that there are so many people who want to define love, but don’t know how.

The reality of it is that love is . . . indescribable, indefinable. It is not something that can be easily encapsulated and yet when you experience love you know it even though you can’t explain it. The thing that my mind always gets stuck on is how it disrupts the laws of mathematics. We all know that one plus one equals two, but in love there are two answers to that: one plus one equals two and one plus one equals one. A man can be a whole person and yet when joined with his partner becomes “one” in another way–“The two shall be as one.” I know that I am complete and a fully realized human being and yet with my partner Brian I somehow become more fully realized when I am one with him. It is mind-boggling. Math has always confused me.

Love is . . . what? I don’t know. I can’t define it in a simple phrase like that. It is useless to try. How can it be summarized in a simple sentence when the universe itself cannot contain it? Trying to describe love does little more than make one sound like a blathering idiot. A person can only live it, feel it, be in it. The definition comes in the experience and it is written upon our souls. But it really cannot be translated.

I know that when our hands touch our souls do, too. I know that when we look into each other’s eyes there is an understanding that transcends this earthly realm. I know that our love is eternal. It is outside of time and space. I know that I don’t need to define it. I just need to be in it, in each moment and always. I know that my love and what I do with it will define me.

Originally from Shullsburg, Wisconsin Callen Harty is the author of four books and numerous published essays, poems, and articles. His most recent book is The Stronger Pull, a memoir about coming out in a small town in Wisconsin. His first book was My Queer Life, a compilation of over 30 years worth of writing on living life as a queer man. It includes essays, poems, speeches, monologues, and more. Empty Playground: A Survivor's Story, is a memoir about surviving childhood sex abuse. His play, Invisible Boy, is a narrative with poetic elements and is also an autobiographical look as surviving child sex abuse. All are available on Amazon.com (and three of them on Kindle) or can be ordered through local bookstores, He has written almost two dozen plays and 50 monologues that have been produced. Most of them have been produced at Broom Street Theater in Madison, Wisconsin where he started as an actor, writer, and director in 1983. He served as the Artistic Director of the theater from 2005-2010. Monologues he wrote for the Wisconsin Veterans’ Museum won him awards from the Wisconsin Historical Society and the American Association of State and Local History. He has also had essays, poems, and articles published in newspapers and magazines around the country and has taken the top prize in several photo contests. His writing has appeared in Out!, James White Review, Scott Stamp Monthly, Wisconsin State Journal, and elsewhere. He has had several essays published online for Forward Seeking, Life After Hate, and The Progressive. Callen has also been a community activist for many years. He was the co-founder of Young People Caring, UW-Madison’s 10% Society, and Proud Theater. He served as the first President of Young People Caring and as the Artistic Director for Proud Theater for its first five years. He is still an adult mentor for the group. In 2003 he won OutReach’s Man of the Year award for his queer community activism. OutReach is Madison, Wisconsin’s lesbian/gay/bisexual/transgender community center. He also won a Community Shares of Wisconsin Backyard Hero award for his sex abuse survivor activism work. He has been invited to speak before many community groups, at a roundtable on queer community theater in New York City, and has emceed several events. In 2016, Wisconsin Coalition Against Sexual Assault named him their annual Courage Award winner for his activism, writing, and speaking on sexual assault.
View all posts by Callen Harty →
This entry was posted in Uncategorized and tagged love, love is. Bookmark the permalink.