On Becoming an Orphan 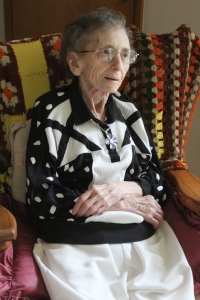 Little boys can have all sorts of unimaginable fears. There can be monsters in the closet or under the bed, temptations of the devil, bullies on the street, bad guys in general, even the horrors of spinach or other foods that are supposed to be good for you, and more.

When I was a little boy my greatest fear was becoming an orphan.

My father died less than two weeks after my second birthday. My grandparents on my mother’s side were already gone before he died. On my father’s side my grandparents were alive when I was a baby, but they lived in South Dakota and they both died before I had any memories of them. Instead of memories I had stories and photographs that gave some clues about who they were and I had my fertile imagination in which my father, grandparents, and others were all heroic figures.

My mother, on the other hand, was human. She was alive. She was real, made of flesh and blood. She was imperfect in her humanity but perfect in her love. She could hug me, kiss me, tuck me in, and did not live in a pantheon of distant denizens who may have loved me, but had left me before I had any memories of that love. They were heroic, larger than life, but they were not of this world. They were in Heaven. My mother was of the earth. Her touch was real. Her hands were sometimes dirty. Her emotions were real. She could love, but also be angry. She could be gentle and stern. She was there, present–a fierce, protective, and loving woman.

As a little boy my greatest fear was losing the one person I absolutely knew loved me and could take care of me and the person I loved more than anyone else in the world. I would lie down at night and often worry about what would happen to me and my siblings if she didn’t wake up the next morning. If she got sick at all I would get scared. Our family had seen a lot of death and it was all too familiar and all too real of a possibility. Even at an early age I knew all too well that any one life is less than a blip in eternity, that mortality was real, and that there were no guarantees that anyone would stay.

That was 50 or so years ago and my mother no longer needs to take care of me. Now she is the one who needs care. Fortunately my oldest brother and my sister are there with her to do that and my other brother and I get there when we can to see her. Yesterday she thought the two of us were her brothers. It was the first time that she has not recognized me. She has lost more than eight pounds in about two weeks and is now at around 80 pounds or a little less. The siblings all met yesterday to talk about funeral plans, an inevitability that we cannot avoid no matter how much we may want to avoid becoming orphans.

All the old fears are resurfacing again. Even at my age I am not ready to be an orphan. But I also recognize what I knew as a child—that life is transient, that we cannot stop the inevitable. I also recognize that with her worsening dementia, and the fact that she finally had a moment when she didn’t recognize me, that I am already an emotional orphan.

I am fortunate that my mother raised me to be independent and strong. I do not need anyone to care for me. She also raised me with a lot of love and because of that I have loved much and I have many people around me who love me in return and who will take care of me, even if I don’t think I need it. I am fortunate that my childhood fears were not realized for decades and that I had my mother in my life so long and that she gave me so much.

I still do not look forward to that inevitable phone call. I know it will hurt deeply. I know also that she will soon join the others in the pantheon of my dreams—only with her she will not be a distant stranger turned into a mythic hero. She will be heroic because of her humanity and her love; and that is not just a blip in eternity because love itself is eternal.

Originally from Shullsburg, Wisconsin Callen Harty is the author of four books and numerous published essays, poems, and articles. His most recent book is The Stronger Pull, a memoir about coming out in a small town in Wisconsin. His first book was My Queer Life, a compilation of over 30 years worth of writing on living life as a queer man. It includes essays, poems, speeches, monologues, and more. Empty Playground: A Survivor's Story, is a memoir about surviving childhood sex abuse. His play, Invisible Boy, is a narrative with poetic elements and is also an autobiographical look as surviving child sex abuse. All are available on Amazon.com (and three of them on Kindle) or can be ordered through local bookstores, He has written almost two dozen plays and 50 monologues that have been produced. Most of them have been produced at Broom Street Theater in Madison, Wisconsin where he started as an actor, writer, and director in 1983. He served as the Artistic Director of the theater from 2005-2010. Monologues he wrote for the Wisconsin Veterans’ Museum won him awards from the Wisconsin Historical Society and the American Association of State and Local History. He has also had essays, poems, and articles published in newspapers and magazines around the country and has taken the top prize in several photo contests. His writing has appeared in Out!, James White Review, Scott Stamp Monthly, Wisconsin State Journal, and elsewhere. He has had several essays published online for Forward Seeking, Life After Hate, and The Progressive. Callen has also been a community activist for many years. He was the co-founder of Young People Caring, UW-Madison’s 10% Society, and Proud Theater. He served as the first President of Young People Caring and as the Artistic Director for Proud Theater for its first five years. He is still an adult mentor for the group. In 2003 he won OutReach’s Man of the Year award for his queer community activism. OutReach is Madison, Wisconsin’s lesbian/gay/bisexual/transgender community center. He also won a Community Shares of Wisconsin Backyard Hero award for his sex abuse survivor activism work. He has been invited to speak before many community groups, at a roundtable on queer community theater in New York City, and has emceed several events. In 2016, Wisconsin Coalition Against Sexual Assault named him their annual Courage Award winner for his activism, writing, and speaking on sexual assault.
View all posts by Callen Harty →
This entry was posted in Uncategorized and tagged brothers, dad, death, dementia, emotions, family, father, fears, grandparents, hero, heroic, human, little boys, living, love, Mom, mother, orphan, sister. Bookmark the permalink.

6 Responses to On Becoming an Orphan