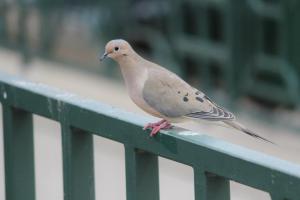 Nature has always been where I find my peace. So when I look for peace in a violent world and I look to nature I am greeted with the fact that the rest of nature is as violent as the world of man. There is no machinery for ant wars; it is all hand-to-hand combat, but there are ant wars. There are packs of animals that surround the weakest of another group and kill it. There are animals in the same species that kill each other or kill their own young. Nature can be cruel and violent.

And yet the birds sing in the morning. Still, the rabbit has bunnies. There is hope amidst the violent ways.

Typically when an animal kills it is for one of a few reasons–hunger, fear, to protect its territory, or to protect its young. Typically when man kills it is for very similar reasons. But the difference is that man also kills for greed, sometimes for pleasure–the thrill of the hunt–and sometimes for no real reason at all. We say we are evolved beyond the other animals because of our brain functions, but if evolution is killing your own for no reason then are we really that evolved? Yes, we can create incredible tools, but we can also create weapons of mass destruction. We can kill each other despite a moral code in every human society that says killing is wrong.

And yet we too can sing. We too can love. There is hope amidst the violent ways.

To truly live we cannot reside in fear. If I do not live in fear I cannot die in fear. To truly live we cannot worry about property lines or possessions. We cannot dwell in hatred–it takes so much energy–or in mistrust. One cannot be fully alive in these places of emotional despair. We have to reach out and connect with our neighbors, with those we are told we should not trust or like. We have to be one with all–all of man, all of nature. We have to recognize the dark and light within our own souls, the capacity for violence and the capacity for compassion, the ability to hate and the ability to love. And we have to make a choice for love, for peace, for goodness, and kindness. We have to make a choice to hear the music in the world, to join in song. If not, we have already lost to violence. I choose to walk through life in peace and compassion.

I can sing. I can love. I can live in peace. There is hope.

Originally from Shullsburg, Wisconsin Callen Harty is the author of four books and numerous published essays, poems, and articles. His most recent book is The Stronger Pull, a memoir about coming out in a small town in Wisconsin. His first book was My Queer Life, a compilation of over 30 years worth of writing on living life as a queer man. It includes essays, poems, speeches, monologues, and more. Empty Playground: A Survivor's Story, is a memoir about surviving childhood sex abuse. His play, Invisible Boy, is a narrative with poetic elements and is also an autobiographical look as surviving child sex abuse. All are available on Amazon.com (and three of them on Kindle) or can be ordered through local bookstores, He has written almost two dozen plays and 50 monologues that have been produced. Most of them have been produced at Broom Street Theater in Madison, Wisconsin where he started as an actor, writer, and director in 1983. He served as the Artistic Director of the theater from 2005-2010. Monologues he wrote for the Wisconsin Veterans’ Museum won him awards from the Wisconsin Historical Society and the American Association of State and Local History. He has also had essays, poems, and articles published in newspapers and magazines around the country and has taken the top prize in several photo contests. His writing has appeared in Out!, James White Review, Scott Stamp Monthly, Wisconsin State Journal, and elsewhere. He has had several essays published online for Forward Seeking, Life After Hate, and The Progressive. Callen has also been a community activist for many years. He was the co-founder of Young People Caring, UW-Madison’s 10% Society, and Proud Theater. He served as the first President of Young People Caring and as the Artistic Director for Proud Theater for its first five years. He is still an adult mentor for the group. In 2003 he won OutReach’s Man of the Year award for his queer community activism. OutReach is Madison, Wisconsin’s lesbian/gay/bisexual/transgender community center. He also won a Community Shares of Wisconsin Backyard Hero award for his sex abuse survivor activism work. He has been invited to speak before many community groups, at a roundtable on queer community theater in New York City, and has emceed several events. In 2016, Wisconsin Coalition Against Sexual Assault named him their annual Courage Award winner for his activism, writing, and speaking on sexual assault.
View all posts by Callen Harty →
This entry was posted in Uncategorized and tagged alive, community, compassion, disease, evolution, fear, goodness, greed, hatred, hope, humanity, hunger, kindness, live, love, mistrust, murder, music, nature, peace, pleasure, possession, property, singing, song, survive, territory, tools, trust, violence, war, weapons, young. Bookmark the permalink.