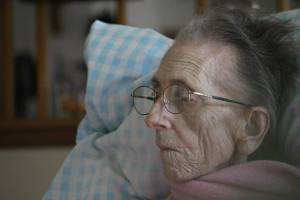 My mother in her favorite chair. Photo by Callen Harty.

The last time I saw my mother she was mostly lucid, her memory seeming fairly sharp, as was her wit. I haven’t been able to get home for a while, but have been getting reports about her health which had been declining but had more or less seemed to level off over the last couple months.

Nothing much has changed with her since that visit. She has been bedridden for much of the past year and has seemed to continue to move slowly toward that inevitable moment of final departure. But she has hung on tenaciously. She is still about a 75 pound weakling. She is still eating a little and taking water, getting a little weaker maybe, and her mind is less sharp. But she has maintained for several months after we all thought she perhaps had a couple weeks left to go. Somehow her vitals are all good. As I’ve often said she is one tough woman. Still, when I look at recent photographs of her compared to even a year ago it is clear that she is winding down her time in this realm. The question is when and of course none of us can know.

The day before yesterday she talked to my sister about funeral arrangements. Coleen assured her that everything was all set for that and that she didn’t have to worry about it. Mom had even arranged much of it years ago. She also assured my mother that all of her kids would be okay. Several of us have had talks with her about end-of-life issues. It’s not something we’ve avoided.

But the other thing she said–the significant thing, especially for a woman of such strong Catholic faith–was that she is ready to meet her Lord. I have felt for a while that she was waiting for something, that there was some kind of unfinished business that she had to attend to before she could go. I didn’t know what it was, but I felt that the things my sister has been getting from taking care of her and the way they have gotten closer in that time may have had something to do with it. Sometimes death and dying entering into our lives gives greater focus and understanding to our living.

Whatever it was (if indeed there was anything) she has now put it out there that she is ready to go. Prior to this the tough lady was fighting all the way. If she’s really at that place of peace and ready to meet her maker then I can’t imagine that she is going to hang on for months more, or probably even weeks. It wouldn’t surprise me if it were down to days because her words clearly acknowledged that she is ready and generally when people get to that point they are indeed ready. Then again she continues to surprise us. I don’t know that I’m ready for her to go yet, but I do know that there is pretty much no quality of life left for her at this point. I also know that no matter how long she lasts or how much preparation we have the moment when she goes will still be difficult. Our sadness at that moment will be her everlasting moment of peace and her pain and confusion will finally be gone. I only hope that if there is a God to greet her that he is ready to dance.

Originally from Shullsburg, Wisconsin Callen Harty is the author of four books and numerous published essays, poems, and articles. His most recent book is The Stronger Pull, a memoir about coming out in a small town in Wisconsin. His first book was My Queer Life, a compilation of over 30 years worth of writing on living life as a queer man. It includes essays, poems, speeches, monologues, and more. Empty Playground: A Survivor's Story, is a memoir about surviving childhood sex abuse. His play, Invisible Boy, is a narrative with poetic elements and is also an autobiographical look as surviving child sex abuse. All are available on Amazon.com (and three of them on Kindle) or can be ordered through local bookstores, He has written almost two dozen plays and 50 monologues that have been produced. Most of them have been produced at Broom Street Theater in Madison, Wisconsin where he started as an actor, writer, and director in 1983. He served as the Artistic Director of the theater from 2005-2010. Monologues he wrote for the Wisconsin Veterans’ Museum won him awards from the Wisconsin Historical Society and the American Association of State and Local History. He has also had essays, poems, and articles published in newspapers and magazines around the country and has taken the top prize in several photo contests. His writing has appeared in Out!, James White Review, Scott Stamp Monthly, Wisconsin State Journal, and elsewhere. He has had several essays published online for Forward Seeking, Life After Hate, and The Progressive. Callen has also been a community activist for many years. He was the co-founder of Young People Caring, UW-Madison’s 10% Society, and Proud Theater. He served as the first President of Young People Caring and as the Artistic Director for Proud Theater for its first five years. He is still an adult mentor for the group. In 2003 he won OutReach’s Man of the Year award for his queer community activism. OutReach is Madison, Wisconsin’s lesbian/gay/bisexual/transgender community center. He also won a Community Shares of Wisconsin Backyard Hero award for his sex abuse survivor activism work. He has been invited to speak before many community groups, at a roundtable on queer community theater in New York City, and has emceed several events. In 2016, Wisconsin Coalition Against Sexual Assault named him their annual Courage Award winner for his activism, writing, and speaking on sexual assault.
View all posts by Callen Harty →
This entry was posted in Uncategorized and tagged Catholic, death, dying, end-of-life, funeral arrangement, God, living, Lord, mother, unfinished business. Bookmark the permalink.