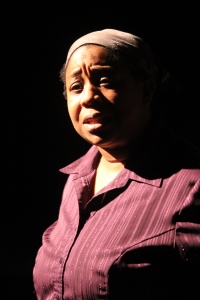 My first opening night was actually an opening day, way back when I was in 5th grade. I had written a play and directed several neighborhood kids in it. The performance space was a basement in my neighbor’s house and I think we charged ten cents a ticket and performed the piece three or four times. I remember torn up bits of paper thrown through a door like snow from a storm outside. I remember my imagination being engaged in ways that nothing else had ever done. Apparently theater was in my blood.

In high school I acted in two plays, but don’t really recall the openings. I vaguely recall anything about the plays, except that I had a very small role in Arsenic and Old Lace and played Tweedledum opposite my good friend Mark in Alice in Wonderland and we had a hoot with it.

Thirty years ago, in the late spring of 1983, a friend tricked me into taking a role in a scene from a play (Clifford Odets’ Golden Boy) for a director’s project at UW-Madison. It changed my life. I immediately wanted to audition and do it again. I was a natural actor and fell in love with it immediately. Since then I have had so many opening nights and I have been a part of so many productions that I can’t even begin to count them. As an actor I’ve been in dozens of productions (60? 70? 80?) and hundreds upon hundreds of performances. My debut as an adult actor in a full-length play in a theater was in Bryn Magnus’ Might at Broom Street Theater in Madison, Wisconsin. It was July 8, 1983 and I remember peeking from behind the curtains as the audience continued to pour into the building. We sold out opening night and then never again after that.

It was twenty years ago that I debuted as a writer with my play first play, Dream Quest. It was hell getting to the opening night and I was terrified, but it went well. Tonight’s opening of Triggered marks the 23rd full-length play I’ve written, plus one adaptation, a one-act, and dozens of monologues as part of a cemetery tour called Talking Spirits which I wrote for the first six years. I’ve directed many other plays as well, so I really don’t know how many openings I’ve had.

The most memorable opening night had to be a play in which I acted almost five years ago–Dancing with my Other, by Kathie Rasmussen. During my next-to-last scene I had a heart attack on stage–in the middle of the stage in the middle of a scene in the middle of an opening night performance. How much more dramatic could I have made it? Thinking I had pulled a muscle (and thinking the show must go on) I exited after the scene, changed costumes, and went out even though I was feeling unwell and did my last scene before going back stage to lie down and break into a cold sweat. The play ended with a real ambulance pulling up to the theater and carting me away with a major heart attack–100% blockage of my left coronary. That one made all the newspapers–not for my acting, but my unusual exit. I was upset that I couldn’t go back the next night to do it again as I had only missed one rehearsal in my entire theatrical career and had never missed a performance. Several other opening nights were memorable, but none so much as that.

The thing that amazes me is that it is still magic–absolute, beautiful, and exhilarating magic. On opening nights I still feel like a little boy at Christmas or on a birthday, but instead of unwrapping a gift it is a story unfolding before my eyes. It is a gift I get to give to others and I get to watch how they react. For myself, no matter how many times I’ve seen the play in rehearsal it reveals itself to me anew each night of performance. Thirty years later I still get butterflies in my stomach when I arrive at the theater on opening night. Thirty years later the rehearsal process is still a daily revelation. Thirty years later it is still magical to watch how a play develops from thoughts to words on paper to actors speaking the lines and later inhabiting the characters. It is still magical to see the lights and hear the sound being added, to witness sets, props, and costumes providing further layers, to watch people come through the door and pay to watch the thing that I am so passionate about, to watch them come along for the journey through an imaginary (yet somehow real) world.

Soon tonight’s opening will be past. The run of the play will be done. It will become another in a long line of memories in more than thirty years of doing this. And before that even happens the beginnings of the next play will already be germinating in my mind.

Originally from Shullsburg, Wisconsin Callen Harty is the author of four books and numerous published essays, poems, and articles. His most recent book is The Stronger Pull, a memoir about coming out in a small town in Wisconsin. His first book was My Queer Life, a compilation of over 30 years worth of writing on living life as a queer man. It includes essays, poems, speeches, monologues, and more. Empty Playground: A Survivor's Story, is a memoir about surviving childhood sex abuse. His play, Invisible Boy, is a narrative with poetic elements and is also an autobiographical look as surviving child sex abuse. All are available on Amazon.com (and three of them on Kindle) or can be ordered through local bookstores, He has written almost two dozen plays and 50 monologues that have been produced. Most of them have been produced at Broom Street Theater in Madison, Wisconsin where he started as an actor, writer, and director in 1983. He served as the Artistic Director of the theater from 2005-2010. Monologues he wrote for the Wisconsin Veterans’ Museum won him awards from the Wisconsin Historical Society and the American Association of State and Local History. He has also had essays, poems, and articles published in newspapers and magazines around the country and has taken the top prize in several photo contests. His writing has appeared in Out!, James White Review, Scott Stamp Monthly, Wisconsin State Journal, and elsewhere. He has had several essays published online for Forward Seeking, Life After Hate, and The Progressive. Callen has also been a community activist for many years. He was the co-founder of Young People Caring, UW-Madison’s 10% Society, and Proud Theater. He served as the first President of Young People Caring and as the Artistic Director for Proud Theater for its first five years. He is still an adult mentor for the group. In 2003 he won OutReach’s Man of the Year award for his queer community activism. OutReach is Madison, Wisconsin’s lesbian/gay/bisexual/transgender community center. He also won a Community Shares of Wisconsin Backyard Hero award for his sex abuse survivor activism work. He has been invited to speak before many community groups, at a roundtable on queer community theater in New York City, and has emceed several events. In 2016, Wisconsin Coalition Against Sexual Assault named him their annual Courage Award winner for his activism, writing, and speaking on sexual assault.
View all posts by Callen Harty →
This entry was posted in Uncategorized and tagged actor, Alice in Wonderland, Arsenic and Old Lace, audition, Broom Street Theater, Bryn Magnus, Clifford Odets, Dancing with My Other, Dream Quest, Golden Boy, heart attack, Kathie Rasmussen, Madison WI, Mark Hawley, Might, opening night, performance, play, stage, Talking Spirits, theater, Triggered, Tweedledum, UW-Madison. Bookmark the permalink.