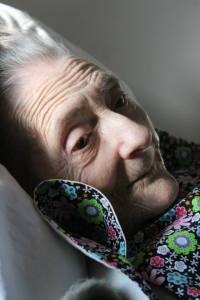 My mother, Kathleen. There is beauty in the lines of her face. Photo by Callen Harty.

Several years ago I was driving back to Madison from my hometown of Shullsburg, Wisconsin in the southwestern corner of the state. It was winter and as I was driving I suddenly noticed incredible colored lights in the sky, shifting around, almost dancing, and as I drove further north they got brighter and moved even more, swirling against the black backdrop of the night sky. I was overwhelmed. It was only the second time in my life that I had seen the Northern Lights, and the first time I had seen them the display was nowhere near as breathtaking. It was indescribable. The beauty and power of it left me dumbstruck. I was overcome with joy and tears came to my eyes. Seeing such a thing makes one realize the smallness of a single life on a single planet, but can also renew faith that there is a power or energy or something far greater than us.

As I was driving home along the same road this evening I was reminded of that night. There were no Northern Lights tonight. Sometimes the miracles in our lives are not so grandiose, but they are miracles nonetheless. Earlier I had been at my infirm mother’s bedside chatting with her. I took pictures of her, studied the lines–the deep lines and wrinkles–in her face, listened to her carefully for clues about how she is really doing because she has been on the precipice of life and death now for a couple years or more. Yet, she hangs on, she survives. Those of us who love her don’t know how or why and maybe we never will. It doesn’t matter. And somehow in the midst of her weakened state she still smiles. She still laughs. Despite her dementia, whatever pain she might be in, despite all that she has been through, she still has a sense of humor. She made me laugh often when I was growing up and she still does, even though her mind is often distant. That miracle brightens my emotional sky far greater than the Northern Lights ever could and it somehow reinvigorates my faith. I look to the sky knowing that some day I will see the Northern Lights again and I look in the rear view mirror and know that my mother’s smile will always be in my mind’s eye.

Originally from Shullsburg, Wisconsin Callen Harty is the author of four books and numerous published essays, poems, and articles. His most recent book is The Stronger Pull, a memoir about coming out in a small town in Wisconsin. His first book was My Queer Life, a compilation of over 30 years worth of writing on living life as a queer man. It includes essays, poems, speeches, monologues, and more. Empty Playground: A Survivor's Story, is a memoir about surviving childhood sex abuse. His play, Invisible Boy, is a narrative with poetic elements and is also an autobiographical look as surviving child sex abuse. All are available on Amazon.com (and three of them on Kindle) or can be ordered through local bookstores, He has written almost two dozen plays and 50 monologues that have been produced. Most of them have been produced at Broom Street Theater in Madison, Wisconsin where he started as an actor, writer, and director in 1983. He served as the Artistic Director of the theater from 2005-2010. Monologues he wrote for the Wisconsin Veterans’ Museum won him awards from the Wisconsin Historical Society and the American Association of State and Local History. He has also had essays, poems, and articles published in newspapers and magazines around the country and has taken the top prize in several photo contests. His writing has appeared in Out!, James White Review, Scott Stamp Monthly, Wisconsin State Journal, and elsewhere. He has had several essays published online for Forward Seeking, Life After Hate, and The Progressive. Callen has also been a community activist for many years. He was the co-founder of Young People Caring, UW-Madison’s 10% Society, and Proud Theater. He served as the first President of Young People Caring and as the Artistic Director for Proud Theater for its first five years. He is still an adult mentor for the group. In 2003 he won OutReach’s Man of the Year award for his queer community activism. OutReach is Madison, Wisconsin’s lesbian/gay/bisexual/transgender community center. He also won a Community Shares of Wisconsin Backyard Hero award for his sex abuse survivor activism work. He has been invited to speak before many community groups, at a roundtable on queer community theater in New York City, and has emceed several events. In 2016, Wisconsin Coalition Against Sexual Assault named him their annual Courage Award winner for his activism, writing, and speaking on sexual assault.
View all posts by Callen Harty →
This entry was posted in Uncategorized and tagged death, dementia, faith, laughter, life, Madison, miracles, mother, Northern Lights, sense of humor, Shullsburg, smile, Wisconsin. Bookmark the permalink.