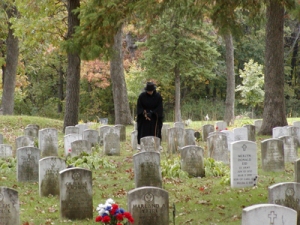 A Woman in Black. Photo by Callen Harty.

These messages of death come
tumbling
across social media as swift as wind-swept leaves.
Robin Williams killed himself, Lauren Bacall is gone,
a teen killed in Missouri, children in Gaza.

We are all connected in our mourning.

I am saddened by Robin Williams’ death,
but I do not think about him.
I think of my dear friend Dan
who struggled with the same demons,
who swallowed a shitload of pills
but then could not swallow his own vomit
and died in his bed with dreams dashed
against the headboard
and pain spilled upon the floor.
White sheets like cotton clouds floating heavenward.

I think of razor blades against my young wrists
and know again that we are all connected.

And I do not think of Lauren Bacall,
but instead see my aging mother
confined to her bed where dreams
are fulfilled in daytime fantasies,
where reality is the four walls around her,
the pillow beneath her head,
and whatever memories and fantastical visions
God allows to intrude
at any given moment.
I ponder her life—
how she has come full circle from baby
to adulthood and back to infancy,
how she
will soon enter the womb of the universe
and be born again into new life,
new energy,
and how some day I will follow her into the stars.

We are connected that way.

I do not think only of movie stars.
I think of my heart and its betrayal,
and its continued beating within the walls of my being.
I think of the mortality
and immortality
of all,
those who have lived and died already,
my heart beating toward its conclusion,
the idea that in my living I am dying.
I can celebrate both–
the living and the dying–
I can celebrate all.
Today we have this moment.
We are connected in this moment.

Yes,
this moment,
it is what we have.

Originally from Shullsburg, Wisconsin Callen Harty is the author of four books and numerous published essays, poems, and articles. His most recent book is The Stronger Pull, a memoir about coming out in a small town in Wisconsin. His first book was My Queer Life, a compilation of over 30 years worth of writing on living life as a queer man. It includes essays, poems, speeches, monologues, and more. Empty Playground: A Survivor's Story, is a memoir about surviving childhood sex abuse. His play, Invisible Boy, is a narrative with poetic elements and is also an autobiographical look as surviving child sex abuse. All are available on Amazon.com (and three of them on Kindle) or can be ordered through local bookstores, He has written almost two dozen plays and 50 monologues that have been produced. Most of them have been produced at Broom Street Theater in Madison, Wisconsin where he started as an actor, writer, and director in 1983. He served as the Artistic Director of the theater from 2005-2010. Monologues he wrote for the Wisconsin Veterans’ Museum won him awards from the Wisconsin Historical Society and the American Association of State and Local History. He has also had essays, poems, and articles published in newspapers and magazines around the country and has taken the top prize in several photo contests. His writing has appeared in Out!, James White Review, Scott Stamp Monthly, Wisconsin State Journal, and elsewhere. He has had several essays published online for Forward Seeking, Life After Hate, and The Progressive. Callen has also been a community activist for many years. He was the co-founder of Young People Caring, UW-Madison’s 10% Society, and Proud Theater. He served as the first President of Young People Caring and as the Artistic Director for Proud Theater for its first five years. He is still an adult mentor for the group. In 2003 he won OutReach’s Man of the Year award for his queer community activism. OutReach is Madison, Wisconsin’s lesbian/gay/bisexual/transgender community center. He also won a Community Shares of Wisconsin Backyard Hero award for his sex abuse survivor activism work. He has been invited to speak before many community groups, at a roundtable on queer community theater in New York City, and has emceed several events. In 2016, Wisconsin Coalition Against Sexual Assault named him their annual Courage Award winner for his activism, writing, and speaking on sexual assault.
View all posts by Callen Harty →
This entry was posted in Uncategorized and tagged Dan, death, Gaza, immortality, Lauren Bacall, Missouri, mortality, mother, mourning, Robin Williams. Bookmark the permalink.