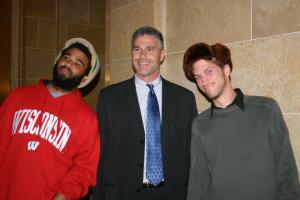 Please tell me that after Tuesday’s judicial schooling of your Assistant Attorney General Timothy Samuelson that you will finally consider dropping your defense of Wisconsin’s clearly unconstitutional ban on marriage equality. While the 7th U. S. Circuit Court of Appeals panel may not release their decision for a few months yet it should be clear, even to a casual observer, that it is likely to be a unanimous decision to uphold Judge Barbara Crabb’s ruling that the state’s marriage amendment is unconstitutional. The judges could not have been more clear about the absurdity of the state’s arguments.

I wish that it had been you in the courtroom rather than your subordinate, Mr. Samuelson. As the top law enforcement officer in the state it seems to me that you should have been the one defending the state’s position in this case. Both you and Governor Walker have insisted that it is your duty to uphold the Constitution by defending the amendment with all your might. What greater case for the Attorney General to personally handle than one that regards the constitutions of both the state of Wisconsin and the United States? Instead you sent someone in your stead and avoided the embarrassment of having to defend an amendment that is indefensible.

Did you instruct Mr. Samuelson to insist upon tradition as the basis of the state’s argument or did he stumble upon that awkward defense himself? As Judge Posner pointed out a tradition of bigotry and hatred does not justify the continuation of the behavior.

Face it, Attorney General, there is not one single solid argument against marriage equality that can withstand judicial scrutiny. Really there are no arguments against it that can withstand a middle school student’s scrutiny. Marriage is solely for procreation? Then those who cannot conceive should no longer be allowed to marry. Opposite sex marriage is better for the children? There is not one legitimate study that shows this. In fact, many studies show the opposite is true. Same-sex marriage will lead to a devaluation of marriage? The divorce rate was already over 50% before Massachusetts became the first state to allow same-sex marriage, and that law has not prevented opposite sex couples from marrying or staying married. Legalizing same-sex marriage will force churches to perform weddings that are against their religion? No, it will mean that same-sex partners will be able to legally marry. Period. Civil marriage and religious ceremonies are two separate things. Some churches will welcome it. Others will not. None will be forced. Marriage has always been between one man and one woman? Well, not always. There have been polygamous societies and research has shown that the early Christian Church likely performed weddings for same-sex couples. The concept of marriage, even in our short American history, has evolved. You hate queer people and think they’re sinners and that is why you want to outlaw same-sex marriage? While that may be the real reason opponents are fighting it that is not cause enough to violate the United States Constitution. In fact, the Constitution was designed in part to protect minorities against that kind of hatred.

Please explain what you have to gain by continuing the fight. There is no doubt the 7th Circuit is going to rule against you. You can appeal to the Supreme Court but every indication is that the U. S. Supreme Court will take all of the various states’ cases into consideration and rule that bans on same-sex marriage are unconstitutional. They cannot rule any other way unless they rule from religious/political bias or from emotions rather than jurisprudence. Even the Supreme Court justices understand the need to be on the right side of history. Even those justices who might personally despise the idea of same-sex marriage can see through the flimsy arguments brought forth by those who support such a ban. The probability is that they will overturn the bans sometime in 2015, opening the way for nationwide same-sex marriage, just as Loving vs. Virginia opened the way for those of different races to marry back in 1967. Unless you have been living under a rock it is clear that decision is coming.

So what do you gain by continuing the losing battle to valiantly defend Wisconsin’s ban on same-sex marriage? Perhaps you gain points with the conservative right who will appreciate your tenacity even in a losing cause. Perhaps you have moral objections yourself to same-sex marriage and do not want to drop the case because that would allow Wisconsin’s queer citizens to start marrying now. I can understand and appreciate that on one level. On the other you are an elected representative of the people and the people of Wisconsin are now of the majority opinion that marriage equality is a legitimate right. In addition you need to keep in mind that there is no state religion. Your personal morals cannot be foisted upon the rest of us.

Perhaps it really is the reason you have given before, that as the Attorney General it is your job–your duty–to defend the Wisconsin Constitution, even if you may disagree with it (or even if you don’t). If that is the case then you will push forward despite the wishes of the people, despite the waste of taxpayer money, despite the inevitable failure of the crusade. You will wait until the 7th Circuit hands down their decision and then you will either appeal to have the full ten-member panel hear the case or appeal it to the United States Supreme Court. Either one will simply delay the inevitable end and paint a little less pleasant picture of your tenure as our Attorney General.

As a citizen I ask again that you do not continue to waste time and resources on this issue. Do us a favor and withdraw your defense of the amendment now.

Originally from Shullsburg, Wisconsin Callen Harty is the author of four books and numerous published essays, poems, and articles. His most recent book is The Stronger Pull, a memoir about coming out in a small town in Wisconsin. His first book was My Queer Life, a compilation of over 30 years worth of writing on living life as a queer man. It includes essays, poems, speeches, monologues, and more. Empty Playground: A Survivor's Story, is a memoir about surviving childhood sex abuse. His play, Invisible Boy, is a narrative with poetic elements and is also an autobiographical look as surviving child sex abuse. All are available on Amazon.com (and three of them on Kindle) or can be ordered through local bookstores, He has written almost two dozen plays and 50 monologues that have been produced. Most of them have been produced at Broom Street Theater in Madison, Wisconsin where he started as an actor, writer, and director in 1983. He served as the Artistic Director of the theater from 2005-2010. Monologues he wrote for the Wisconsin Veterans’ Museum won him awards from the Wisconsin Historical Society and the American Association of State and Local History. He has also had essays, poems, and articles published in newspapers and magazines around the country and has taken the top prize in several photo contests. His writing has appeared in Out!, James White Review, Scott Stamp Monthly, Wisconsin State Journal, and elsewhere. He has had several essays published online for Forward Seeking, Life After Hate, and The Progressive. Callen has also been a community activist for many years. He was the co-founder of Young People Caring, UW-Madison’s 10% Society, and Proud Theater. He served as the first President of Young People Caring and as the Artistic Director for Proud Theater for its first five years. He is still an adult mentor for the group. In 2003 he won OutReach’s Man of the Year award for his queer community activism. OutReach is Madison, Wisconsin’s lesbian/gay/bisexual/transgender community center. He also won a Community Shares of Wisconsin Backyard Hero award for his sex abuse survivor activism work. He has been invited to speak before many community groups, at a roundtable on queer community theater in New York City, and has emceed several events. In 2016, Wisconsin Coalition Against Sexual Assault named him their annual Courage Award winner for his activism, writing, and speaking on sexual assault.
View all posts by Callen Harty →
This entry was posted in Uncategorized and tagged 7th U. S. Circuit Court of Appeals, Barbara Crabb, bigotry, conservative right, Constitution, divorce, Governor Walker, hatred, J. B. Van Hollen, Judge Posner, judicial scrutiny, Loving vs. Virginia, marriage amendment, marriage equality, MAssachusetts, Supreme Court, Timothy Samuelson, tradition, Wisconsin Attorney General. Bookmark the permalink.

1 Response to Open Letter to the Wisconsin Attorney General