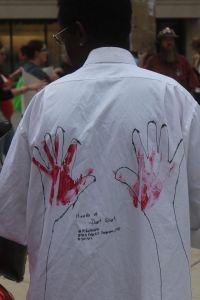 Hands Up. Photo by Callen Harty.

It was with deep sorrow that I awakened to morning in America today.

Fires burned on the streets of Ferguson overnight and there is fire in my soul this morning. I am angry, I am saddened, I am moved. It feels to me that everything about the Michael Brown case has either been incredibly inept or carefully planned for effect.

Let’s put it this way. It seems to me that if one hundred or even three or four hundred protesters showed up on the streets of any city to protest and there was no police presence and no media presence they would conduct their protest, recite their speeches, commiserate with each other, take pictures and post online about the event, and then go home after having made a statement. They might meet again to plan actions and to bring change to the world. But last night was set up–either intentionally or from bumbling bureaucrats–to incite a violent reaction. It could have led to no other result.

Calling in the National Guard a week before the announcement about the grand jury’s decision trumpeted the idea that those in power expected (wanted?) a violent reaction. Having the FBI put out a press release about a potential powder keg in Ferguson added to it, as did the local police preparations. These things also reinforced the idea of angry and violent blacks we have to fear. Very little was reported about the activists working toward peaceful demonstrations and working toward a more just justice system.

Announcing in advance that a decision would come sometime in November without giving a specific date caused additional tension because no one knew when the decision would ultimately come. It added to the stress.

All of this brought in more press to document everything that might happen. All the news cameras and reporters were ready on the streets, near the site of previous protests. When President Obama spoke the screen was split and showed him asking for peace and meaningful protest while on the other side of the screen we watched police firing smoke bombs and attempting to disperse the crowd. It was surreal.

The coup de grace was the timing and delivery of the announcement. Protest organizers were prepared for peaceful demonstrations all day long, but did not expect an announcement deep into the evening, effectively leaving them out of the immediate reaction. Protests and demonstrations rarely turn violent in the light of day. Late in the day the press conference was announced for 8:00 p.m., which seemed awfully late to hold it. The press conference could have been held at 8:00 a.m. today. The 8:00 p.m. time was scheduled after we had already heard 4:00 and then 5:00, leaving everyone on edge for exactly when it was going to be. Robert McCulloch then showed up late, took the microphone, droned on for about half an hour while clearly trying to justify a decision he knew would be received poorly (and which many believe he wanted all along) and he unfortunately did not add anything new to the law enforcement version of the story.

What did happen was not unexpected. Angry citizens, mostly young people whose lives are discounted on a daily basis, reacted in anger. Most of them expressed their anger with signs and loud voices. A few set fires to buildings and police cars, fired guns, threw bottles, and otherwise created havoc.

What occurs to me today is that for oppressors a violent reaction with good television visuals like burning police cars and buildings is not necessarily a bad thing (unless the demonstrators had first marched from their neighborhoods to those of the power brokers). Think about it. What is the media talking about this morning? The reaction, not the injustice. All the demonstrators who have been there for months and wanted to use the announcement as a way to explore deeper issues, the Brown family who wanted to use it as a launching pad to push for body cameras on all police officers, all the downtrodden citizens who hoped to engage the ruling class in discussions about all that needs to be fixed–all of them have been silenced by rage and raging fires. The story is the reaction, not what caused the reaction.

We can’t let McCulloch, the police, the government, and the media co-opt the narrative in Ferguson. Yes, it is sad that local businesses were burned, but it is sadder still that in general in this country black lives do not matter. It is not good that police cars were burned; it is worse yet that a young unarmed black man died for no apparent reason. It is far worse that this happens about once a day in cities all over the country and that most of the time it goes unnoticed and the officers involved face no consequences.

Those who want to see the dismantling of oppressive power, those who know that black lives matter, those who want to bring a new and better morning to America must take control of the conversation. We must talk about the systemic racism in this country. We must talk about the violence perpetrated upon people of color–and this includes economic violence as well as physical violence. We must talk about the fact that there is no American dream for countless people but an American nightmare of inequity and injustice. We must hold the police and the government accountable and we must somehow lead the unwilling to an understanding of the issues. Along with the conversation there needs to be action. There needs to be pressure put on legislators and police departments to make change. Young people of color need to run for office. Laws must be enacted or changed to make lives better for all. Economic inequality needs to be faced. Police must be made to wear body cameras. The justice system needs to be fixed.

We need to do this together. We need to join hands, African-Americans with white allies, Asians, Latinos, straight and gay, Christians, Muslims, and Jews. We are all in it. We are all responsible and we must all accept the responsibility of creating the changes that are needed to make the American dream a reality for all.

Originally from Shullsburg, Wisconsin Callen Harty is the author of four books and numerous published essays, poems, and articles. His most recent book is The Stronger Pull, a memoir about coming out in a small town in Wisconsin. His first book was My Queer Life, a compilation of over 30 years worth of writing on living life as a queer man. It includes essays, poems, speeches, monologues, and more. Empty Playground: A Survivor's Story, is a memoir about surviving childhood sex abuse. His play, Invisible Boy, is a narrative with poetic elements and is also an autobiographical look as surviving child sex abuse. All are available on Amazon.com (and three of them on Kindle) or can be ordered through local bookstores, He has written almost two dozen plays and 50 monologues that have been produced. Most of them have been produced at Broom Street Theater in Madison, Wisconsin where he started as an actor, writer, and director in 1983. He served as the Artistic Director of the theater from 2005-2010. Monologues he wrote for the Wisconsin Veterans’ Museum won him awards from the Wisconsin Historical Society and the American Association of State and Local History. He has also had essays, poems, and articles published in newspapers and magazines around the country and has taken the top prize in several photo contests. His writing has appeared in Out!, James White Review, Scott Stamp Monthly, Wisconsin State Journal, and elsewhere. He has had several essays published online for Forward Seeking, Life After Hate, and The Progressive. Callen has also been a community activist for many years. He was the co-founder of Young People Caring, UW-Madison’s 10% Society, and Proud Theater. He served as the first President of Young People Caring and as the Artistic Director for Proud Theater for its first five years. He is still an adult mentor for the group. In 2003 he won OutReach’s Man of the Year award for his queer community activism. OutReach is Madison, Wisconsin’s lesbian/gay/bisexual/transgender community center. He also won a Community Shares of Wisconsin Backyard Hero award for his sex abuse survivor activism work. He has been invited to speak before many community groups, at a roundtable on queer community theater in New York City, and has emceed several events. In 2016, Wisconsin Coalition Against Sexual Assault named him their annual Courage Award winner for his activism, writing, and speaking on sexual assault.
View all posts by Callen Harty →
This entry was posted in Uncategorized and tagged African-Americans, American dream, Asians, black lives, body cameras, Christian, economic violence, FBI, Ferguson, gay, government, grand jury, inequity, injustice, Jews, justice, Latinos, law enforcement, media, Michael Brown, Muslims, National Guard, police, President Obama, protesters, racism, Robert McCulloch, ruling class, straight, white allies. Bookmark the permalink.