It’s About More than Money 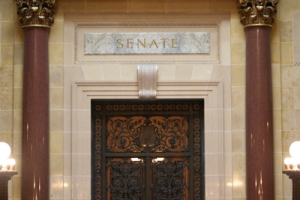 Wisconsin is in danger of becoming the 25th “right to work” state by early March, with hearings held today, a Senate vote coming later in the week, an expected Assembly vote at the beginning of March, and an assured signature from the governor as soon as possible after that.

It’s possible to convert one of the Republican Senate votes so that it doesn’t pass and one would think that the Democratic Party of Wisconsin would be doing everything they could to make that happen and to educate the public and encourage contact with legislators.

Instead, I got the following e-mail today from Mike Tate, chairman of the state party:

“The state Senate is set to take up legislation that would make Wisconsin a right-to-work state. They’re attacking our state’s working families. We HAVE to fight back before Scott Walker and his GOP allies succeed.

“But we can’t fight back alone. We need your help. We have to raise $5,200 before COB today if we want to keep the pressure on the GOP to stop them from passing right to work legislation.”

That was followed by several links allowing me to instantly donate money to the cause and then a signature of “Solidarity, Mike”.

I was so irritated I hit reply and sent the following response:

“Dear Mike (or whomever reads this for him),

“Must you use every bill that comes up, every event that occurs, every possible angle there is in order to continue raising money? What do you do with all that money? I would think you could use it to actually fight the things that you use as excuses to raise more money.

“Perhaps you could occasionally send an e-mail to those on your lists that serves to educate the public about the nuances of a bill or how to get in touch with their legislators.

“You say that Republicans are attacking working families, but you don’t say how. Maybe there are people who need to understand the issue better. You put in bold letters that we have to fight back, but you neglect to mention what the Democratic Party of Wisconsin is doing to fight back. You note that you need to raise $5,200 before the end of the business day in order to keep pressure on the Republicans over this, but you don’t tell us what you are doing to put pressure on them.

“I wish you would please quit appealing to our emotional responses to bad legislation in order to raise more money and instead tell us what you are doing to fight bad legislation. If I knew that you were at the Capitol today protesting with my brothers and sisters, or that you were meeting with one of the handful of Republican senators who could possibly be convinced to vote against their party, then I might be willing to send you a check without you even having to ask.

“The only communications I ever get from you are pleas for more money in order to fight the evil Republicans. I will not be sending you a check until I know what you are doing with the money (other than throwing it at hand-picked candidates who have no realistic chance of winning) and what you are doing (other than campaigning) to seriously fight the draconian actions of the governor and legislature.

“I’m guessing I’m not the only one who feels this way. Your requests for donations would be far more effective if they weren’t the only things you ever sent. Mix it up a bit. Tell us what you are doing for us. Show us concrete ways that the money will be used. Maybe then my first reaction would not be to hit the ‘trash’ button on my computer.”

Originally from Shullsburg, Wisconsin Callen Harty is the author of four books and numerous published essays, poems, and articles. His most recent book is The Stronger Pull, a memoir about coming out in a small town in Wisconsin. His first book was My Queer Life, a compilation of over 30 years worth of writing on living life as a queer man. It includes essays, poems, speeches, monologues, and more. Empty Playground: A Survivor's Story, is a memoir about surviving childhood sex abuse. His play, Invisible Boy, is a narrative with poetic elements and is also an autobiographical look as surviving child sex abuse. All are available on Amazon.com (and three of them on Kindle) or can be ordered through local bookstores, He has written almost two dozen plays and 50 monologues that have been produced. Most of them have been produced at Broom Street Theater in Madison, Wisconsin where he started as an actor, writer, and director in 1983. He served as the Artistic Director of the theater from 2005-2010. Monologues he wrote for the Wisconsin Veterans’ Museum won him awards from the Wisconsin Historical Society and the American Association of State and Local History. He has also had essays, poems, and articles published in newspapers and magazines around the country and has taken the top prize in several photo contests. His writing has appeared in Out!, James White Review, Scott Stamp Monthly, Wisconsin State Journal, and elsewhere. He has had several essays published online for Forward Seeking, Life After Hate, and The Progressive. Callen has also been a community activist for many years. He was the co-founder of Young People Caring, UW-Madison’s 10% Society, and Proud Theater. He served as the first President of Young People Caring and as the Artistic Director for Proud Theater for its first five years. He is still an adult mentor for the group. In 2003 he won OutReach’s Man of the Year award for his queer community activism. OutReach is Madison, Wisconsin’s lesbian/gay/bisexual/transgender community center. He also won a Community Shares of Wisconsin Backyard Hero award for his sex abuse survivor activism work. He has been invited to speak before many community groups, at a roundtable on queer community theater in New York City, and has emceed several events. In 2016, Wisconsin Coalition Against Sexual Assault named him their annual Courage Award winner for his activism, writing, and speaking on sexual assault.
View all posts by Callen Harty →
This entry was posted in Uncategorized and tagged "right to work", Assembly, Capitol, Democratic Party of Wisconsin, GOP, governor, legislation, Mike Tate, Republican, Scott Walker, Senate, Wisconsin. Bookmark the permalink.

4 Responses to It’s About More than Money