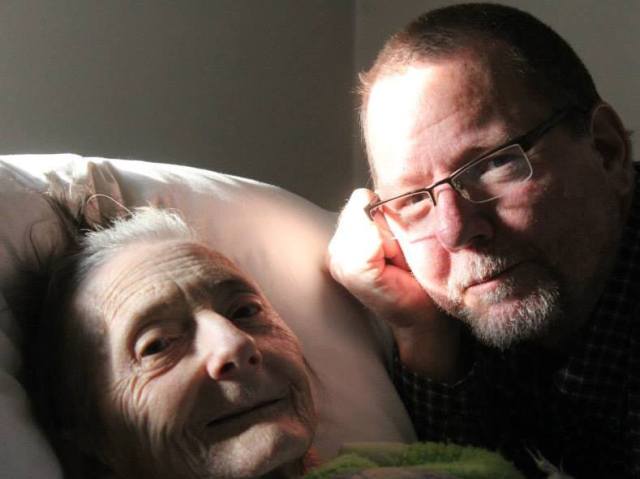 Yesterday my mother turned 91 years old. Today I am driving down to my hometown to see her. Every time I go I wonder, “Will this be the last time I see her? If so, what will my last memory be? Will she know who I am today, or just be glad that some man came to visit?”

She has survived a lot, so maybe I shouldn’t worry. She was given last rites by the priest more than two years ago. She was on hospice and then kicked off of it because she was doing so well. She is tough. But she is also frail, and I worry.

Yesterday my sister called–she was calling all the siblings–just to verify that she should not call an ambulance or do anything out of the ordinary if things worsen. Mom never wanted to be put into a nursing home, did not want to be resuscitated if it came to that, and expressed often that she wanted to be in her home when the time comes for her to go. So of course I said that we should honor her wishes. She has been at home for the entire duration of her decline and she will be there to the end.

The reason it became a question yesterday is because a nurse was there for her regular visit and mentioned that my mother’s body may be starting the process of shutting down. She said that if that were the case it could be five minutes, five hours, days, weeks, or even months. There is no way to tell. What she related was that Mom’s pulse was erratic, her breathing seemed shallow, she couldn’t find Mom’s blood pressure because the heartbeat was so faint, she thought she saw some darkening of the skin, and a couple other things that might be signs.

My mother has been bedridden for several years now. All of us should have had plenty of time to prepare for the inevitable, but she has miraculously survived so many times when we thought it might be near the end that it seems that she may go on forever. She has been magical that way. She recently told my sister that she planned to live to 110, and that may yet be true.

Still, I am nervous about this visit. For the last week or so I’ve had an uneasy feeling about this 91st birthday. I wanted to be there for it yesterday, but couldn’t so I was planning on going today anyway. I don’t know if I want to be there when the time comes for her to leave this plane. I don’t know if I want to be away from her when that happens either. Either way I don’t feel ready for her not to be in my life, even when she may not know who I am anymore.

Nevertheless I will go today. I will kiss her. I will tell her I love her. And I will hope that if this does prove to the last visit that it will be a good one.

Originally from Shullsburg, Wisconsin Callen Harty is the author of four books and numerous published essays, poems, and articles. His most recent book is The Stronger Pull, a memoir about coming out in a small town in Wisconsin. His first book was My Queer Life, a compilation of over 30 years worth of writing on living life as a queer man. It includes essays, poems, speeches, monologues, and more. Empty Playground: A Survivor's Story, is a memoir about surviving childhood sex abuse. His play, Invisible Boy, is a narrative with poetic elements and is also an autobiographical look as surviving child sex abuse. All are available on Amazon.com (and three of them on Kindle) or can be ordered through local bookstores, He has written almost two dozen plays and 50 monologues that have been produced. Most of them have been produced at Broom Street Theater in Madison, Wisconsin where he started as an actor, writer, and director in 1983. He served as the Artistic Director of the theater from 2005-2010. Monologues he wrote for the Wisconsin Veterans’ Museum won him awards from the Wisconsin Historical Society and the American Association of State and Local History. He has also had essays, poems, and articles published in newspapers and magazines around the country and has taken the top prize in several photo contests. His writing has appeared in Out!, James White Review, Scott Stamp Monthly, Wisconsin State Journal, and elsewhere. He has had several essays published online for Forward Seeking, Life After Hate, and The Progressive. Callen has also been a community activist for many years. He was the co-founder of Young People Caring, UW-Madison’s 10% Society, and Proud Theater. He served as the first President of Young People Caring and as the Artistic Director for Proud Theater for its first five years. He is still an adult mentor for the group. In 2003 he won OutReach’s Man of the Year award for his queer community activism. OutReach is Madison, Wisconsin’s lesbian/gay/bisexual/transgender community center. He also won a Community Shares of Wisconsin Backyard Hero award for his sex abuse survivor activism work. He has been invited to speak before many community groups, at a roundtable on queer community theater in New York City, and has emceed several events. In 2016, Wisconsin Coalition Against Sexual Assault named him their annual Courage Award winner for his activism, writing, and speaking on sexual assault.
View all posts by Callen Harty →
This entry was posted in Uncategorized and tagged hometown, Hospice, last rites, memory, Mom. Bookmark the permalink.