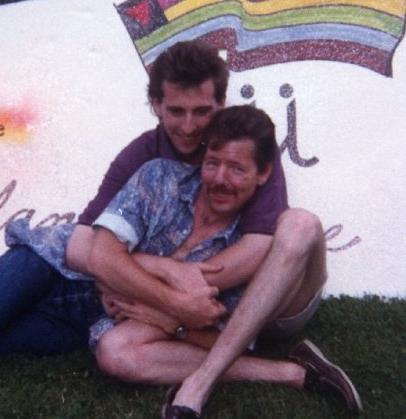 The earliest picture of Brian and me. At Milwaukee’s PrideFest, 1991. Photographer unknown.

In May of 1991 I had just moved back to Madison, Wisconsin after four years in Denver, Colorado. Denver was beautiful and I loved it and had made many friends there, but it was never home. I had also recently broken up with my boyfriend after a five-year long relationship and countless break-ups and make-ups. I was tired of the emotional yo-yo and had also decided that it was the last break-up and that I didn’t need anyone else in my life to be fulfilled and to be a complete human being.

Shortly after moving to Madison I was at the pinball machine at Rod’s bar, a basement bar in the old Hotel Washington building which burned down several years later. I looked up and saw my friend, Billy, coming down the stairs with someone I hadn’t seen before. I can’t remember if I thought it to myself or said it aloud to my friend, Dan, but I remember my first thought was, “Damn, that boy’s cute.” Billy introduced me to Brian, they wandered off, and I went back to my pinball game. We bumped into each other again a little bit later, but that was about it.

By that time in my  life I was sober. I had quit drinking after more than a decade of nearly constant drunkenness. Still, I went back to Rod’s for several nights in a row hoping to bump into Brian again. There was something about him. I wanted to talk to him some more. One night when I was there by myself with an empty bar stool next to me Brian walked in the door and asked if he could join me. He sat down and we ended up talking for hours–about gay politics, other politics, theater, movies, music, philosophy, religion, and on and on. There was a connection there, some indefinable understanding that while we were different we shared many interests and convictions.

After five years with my ex I was not looking for a relationship at that time, but at some point after that long conversation in the bar we had our first date, and then another, and another. On my birthday on May 27 we had another date and kissed for the first time as Brian was at the door ready to head home for the night. Happy Birthday to me! By June 1 we had determined that we were a couple. Within a short time I knew that it would be the longest relationship of my life. Within a short time after that I knew that we were meant for each other and that it would be a lifetime (and beyond) relationship.

We have been through a lot together. We have worked together to make Proud Theater, an LGBT youth theater group, a success. We have worked together in other theater work, primarily at Broom Street Theater. We work well together. We are each other’s biggest fans. We make each other laugh. After twenty-five years we still laugh a lot and I truly believe that is one of the important keys to a long-lasting relationship.

On the other hand, we have each watched the other lose a best friend–my friend to suicide, his to AIDS, as well as other friends and family. We have watched as his mother died of cancer and as my mother has slowly degenerated into dementia. We have supported each other through many difficult emotional issues. And with each tough day that we have experienced we have grown stronger together.

Twenty-five years later our love continues to grow. Now we don’t have to finish sentences. We support each other in all we do, but are honest when we don’t agree. We rarely disagree strongly and we have had only a few major disagreements or fights in our time together. We joke about growing old together. We appreciate each other more with each passing day. We still hold hands all the time. We still kiss each other upon leaving or arriving. We still say I love you every day, many times. And as we grow older we both fear losing the other, not being able to imagine life without each other.

Interestingly we are each our own men. We do not need the other to be complete, and yet we complete each other in some way. We complement each other (and compliment each other). We are whole beings by ourselves but we are made more whole together.

When I was younger I couldn’t imagine finding a life partner. I couldn’t imagine a day when I could marry a partner. When that became legal we decided to wait until our 25th anniversary because we wanted to make sure it would stay legal and that it would be legal in our home state of Wisconsin. We are now planning that for sometime in the fall. We don’t need that to know that we are committed to each other. We don’t need to pronounce it aloud so that others know. Our love will outlast the paper. I look forward to the next twenty-five years.

Originally from Shullsburg, Wisconsin Callen Harty is the author of four books and numerous published essays, poems, and articles. His most recent book is The Stronger Pull, a memoir about coming out in a small town in Wisconsin. His first book was My Queer Life, a compilation of over 30 years worth of writing on living life as a queer man. It includes essays, poems, speeches, monologues, and more. Empty Playground: A Survivor's Story, is a memoir about surviving childhood sex abuse. His play, Invisible Boy, is a narrative with poetic elements and is also an autobiographical look as surviving child sex abuse. All are available on Amazon.com (and three of them on Kindle) or can be ordered through local bookstores, He has written almost two dozen plays and 50 monologues that have been produced. Most of them have been produced at Broom Street Theater in Madison, Wisconsin where he started as an actor, writer, and director in 1983. He served as the Artistic Director of the theater from 2005-2010. Monologues he wrote for the Wisconsin Veterans’ Museum won him awards from the Wisconsin Historical Society and the American Association of State and Local History. He has also had essays, poems, and articles published in newspapers and magazines around the country and has taken the top prize in several photo contests. His writing has appeared in Out!, James White Review, Scott Stamp Monthly, Wisconsin State Journal, and elsewhere. He has had several essays published online for Forward Seeking, Life After Hate, and The Progressive. Callen has also been a community activist for many years. He was the co-founder of Young People Caring, UW-Madison’s 10% Society, and Proud Theater. He served as the first President of Young People Caring and as the Artistic Director for Proud Theater for its first five years. He is still an adult mentor for the group. In 2003 he won OutReach’s Man of the Year award for his queer community activism. OutReach is Madison, Wisconsin’s lesbian/gay/bisexual/transgender community center. He also won a Community Shares of Wisconsin Backyard Hero award for his sex abuse survivor activism work. He has been invited to speak before many community groups, at a roundtable on queer community theater in New York City, and has emceed several events. In 2016, Wisconsin Coalition Against Sexual Assault named him their annual Courage Award winner for his activism, writing, and speaking on sexual assault.
View all posts by Callen Harty →
This entry was posted in Uncategorized and tagged AIDS, Broom Street Theater, cancer, connection, couple, dementia, Denver Colorado, disagreements, gay politics, Happy Birthday, hold hands, Hotel Washington, I love you, kiss, life partner, love, Madison Wisconsin, Milwaukee PrideFest, movies, music, philosophy, politics, Proud Theater, relationship, religion, Rod's Bar, sober, suicide, support, theater. Bookmark the permalink.