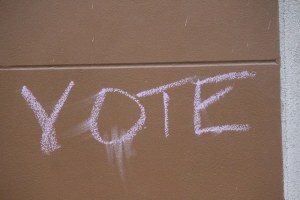 Because I am an optimist and truly want to believe in the best of everyone I keep thinking that we are all Americans regardless of political affiliation, religious beliefs, or anything else, and that after the 2016 election is over tomorrow everything will return to normal. Those who have unfriended others on Facebook or cut them out of their lives in the real world will wake up and realize that there are things more important than which candidate received your vote. People screaming at each other in the streets will calm down, the tension of the election will dissipate, and we will return to being enemies because of sports teams again rather than politics. Slanted news stories from biased writers who pretend to be objective journalists will disappear from the pages of newspapers. And the ads which take sound bites out of context to make others appear to be monsters will fade from our screens and speakers.

But as optimistic as I want to be I am also a realist in other ways. This election has been unlike anything I have seen in my life. I know that mudslinging goes back to the earliest days of our country. In every election we see civility disappear and attack dogs let loose. This is nothing new, but the absolute vitriol on display in this cycle is the worst I have seen in my four decades of voting. I also understand that in every one of the last number of elections people have hysterically claimed that those who vote third party are dooming us by allowing the wrong major party candidates to win because a vote for X is really a vote for Y or Z–in this case a vote for Jill Stein or Gary Johnson or a handful of other candidates is really a vote for Hillary Clinton or Donald Trump–depending on which one you support. I don’t believe it’s true, and I do believe that part of being a good citizen is to vote your conscience for the candidate you think is the best choice. In my view, if a major party candidate loses because of third party votes then they didn’t do their job in convincing enough people to vote for them.

So there are these recurring themes that we see every election. One of them is that enemies are made out of family members and friends because of disagreements over political choices. This is where my idealism has always come into play in the past. If a friend or relative voted for a candidate that I would never vote for I have always been understanding of that. I have tried to understand why they might have a difference of opinion and tried to see it from their point-of-view. I have accepted the results of elections, sometimes unhappily–especially in the case of George W. Bush–but life has gone on, my friendships have continued, and as a political junkie I could look forward to the next time around to support a candidate more to my liking.

This election is different. In this election Donald Trump has staked out turf that is beyond my ability to try to understand or accept. He has not just attacked his primary competitor, which is to be expected, he has assaulted a wide range of my fellow citizens and friends–Hispanics, differently abled, African-Americans, women, Muslims, and on and on and on. If he should win I fear for all of them. As a gay man I fear for my rights, if not my life. When he chose Mike Pence as his running mate I knew that he could not become President or my life could be upended. Pence is one of the most anti-LGBT politicians in the country and Trump’s choice of him as a Vice-Presidential running mate was all I needed to know about how Trump truly feels about queer people, despite his occasional feeble attempts at seeming to reach out to our community. He couldn’t even gain the endorsement of the Log Cabin Republicans, a group of traitorous gay people who tend to care less about their rights than their financial well-being.

Trump also bragged about being able to assault women and get away with it. Jimmy Carter almost cost himself his election by admitting that he had lusted in his heart, though he never acted on it. Trump has been accused by numerous women of more than lusting. He has been accused of inappropriate behavior and sexual assault. As a male survivor of sexual abuse this is concerning, as are his language and actions in the  videotape in which he bragged about being able to grab women who will let him do it because he is famous. It is incredibly triggering. It is unacceptable.

Because of these things, his infantile behavior with Twitter wars, his inability to check himself, and more, it doesn’t matter to me at this point what Trump’s actual political viewpoints are. I wouldn’t care if he had plans to make America greater than it’s ever been–which, by the way, he doesn’t–he is not an acceptable candidate because he is not an acceptable man. He is instead a hateful, narcissistic authoritarian man. He is not worthy of the Presidency or any other political office in this country. In the past I could forgive others for voting for candidates whose policies I felt were not to my liking. But this is not about policies. It is about basic human decency, honor, and compassion.

I cannot understand anyone who knows and loves me or knows anyone from any of the groups Trump has attacked so viciously actually casting a vote for him. How can you look me in the eye and tell me you love me for who and what I am and then vote for Trump and Pence? How can you look at anyone you know who is Latino or Muslim and tell them Trump is the best candidate? How can you look into the eyes of any person who has been the victim of sexual assault, which is as many as one in three in this country, and proudly say you voted for Donald Trump?

I would understand it if it were a different man with the same political ideas. I truly would. I would get it if you didn’t know anyone in any of the groups he has attacked and from that place of privilege didn’t have to think about how horrible a Trump presidency would be for others. But I cannot believe that if you truly know me and care for me you could vote for him. I cannot believe that you could call me a friend and pull the lever for Trump. In this election I cannot understand and likely cannot forgive, because I value my life and the lives of my fellow Americans–African-Americans, Muslims, women, immigrants, and others–more than a relationship that can be discarded so easily for partisan reasons.

Originally from Shullsburg, Wisconsin Callen Harty is the author of four books and numerous published essays, poems, and articles. His most recent book is The Stronger Pull, a memoir about coming out in a small town in Wisconsin. His first book was My Queer Life, a compilation of over 30 years worth of writing on living life as a queer man. It includes essays, poems, speeches, monologues, and more. Empty Playground: A Survivor's Story, is a memoir about surviving childhood sex abuse. His play, Invisible Boy, is a narrative with poetic elements and is also an autobiographical look as surviving child sex abuse. All are available on Amazon.com (and three of them on Kindle) or can be ordered through local bookstores, He has written almost two dozen plays and 50 monologues that have been produced. Most of them have been produced at Broom Street Theater in Madison, Wisconsin where he started as an actor, writer, and director in 1983. He served as the Artistic Director of the theater from 2005-2010. Monologues he wrote for the Wisconsin Veterans’ Museum won him awards from the Wisconsin Historical Society and the American Association of State and Local History. He has also had essays, poems, and articles published in newspapers and magazines around the country and has taken the top prize in several photo contests. His writing has appeared in Out!, James White Review, Scott Stamp Monthly, Wisconsin State Journal, and elsewhere. He has had several essays published online for Forward Seeking, Life After Hate, and The Progressive. Callen has also been a community activist for many years. He was the co-founder of Young People Caring, UW-Madison’s 10% Society, and Proud Theater. He served as the first President of Young People Caring and as the Artistic Director for Proud Theater for its first five years. He is still an adult mentor for the group. In 2003 he won OutReach’s Man of the Year award for his queer community activism. OutReach is Madison, Wisconsin’s lesbian/gay/bisexual/transgender community center. He also won a Community Shares of Wisconsin Backyard Hero award for his sex abuse survivor activism work. He has been invited to speak before many community groups, at a roundtable on queer community theater in New York City, and has emceed several events. In 2016, Wisconsin Coalition Against Sexual Assault named him their annual Courage Award winner for his activism, writing, and speaking on sexual assault.
View all posts by Callen Harty →
This entry was posted in Uncategorized and tagged ads, African-Americans, Americans, assault, authoritarian, candidate, compassion, differently abled, Donald Trump, election, Facebook, Gary Johnson, gay, George W. Bush, Hillary Clinton, Hispanics, honor, human decency, immigrants, Jill Stein, Jimmy Carter, journalists, Latino, Log Cabin Republicans, male survivor, Mike Pence, mudslinging, Muslims, news, newspapers, optimist, partisan, political affiliation, political junkie, politics, President, primary, privilege, realist, religious beliefs, running mate, seuxal abuse, sexual assault, sound bites, sports, third party, Twitter, vote, women. Bookmark the permalink.