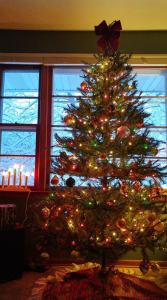 Last night as I was driving home under the stars on tops of evergreen trees and past lights behind frosty windows I thought of my mother and I cried. She is old now, bedridden and infirm, somehow staying alive when we thought she would be gone before Christmas several years in a row. She has been on my mind a lot lately. In a sad way she is already gone though still physically present. She doesn’t recognize people, she doesn’t know her own history most of the time, she is weak. And yet she hangs on to her tenuous life with a ferocity that amazes.

But I wasn’t crying for her inevitable decline and passing, which could be years from now with her Irish stubbornness and toughness. The tears were more for what has already been lost. What I have now is memories, but she has shown me that memories can be as fragile as life. I cried in part for the joyful memories. In more youthful Christmastimes she would load all of us kids into the car and drive around town to look at all the pretty lights hung from trees and houses. Many of my best memories are of Mom in the car: sudden surprise trips to the drive-in eight miles away in Benton or twelve miles away in Darlington where we would enjoy ice cream (still her favorite treat); treks to Dubuque or Madison for shopping; going along with her through early morning fog when she would drive my oldest brother to work at his job in Monroe; trips to visit relatives in Hanover, Illinois or just out to the country to farms of relatives and friends; even the short jaunts downtown or to the post office–all of which gave time just to be together and talk and marvel at the world around us.

In high school Yahtzee, Scrabble, and other games were used the same way. We would spend hours sitting at the table rolling dice and striving to win while discussing the state of the world. We loved each other’s company then–we talked, we shared deep things with each other, we laughed. Oh, did we laugh. We laughed a lot. Sometimes there would be laughing jags so long and so hard that we would both end up in tears from the laughter, with my mother snorting loudly as it continued, and that would make her and me both laugh even more. She loved her Yahtzee, but the game didn’t really matter. It was the thing that brought us together to sit for a while and be with each other. She was fiercely competitive, but I think we both won when spending that time together and I think she knew that.

These things can come to a person at the most unlikely of moments, but I understood fully last night why holidays can be so difficult for so many people. In many families, just like mine, the parents do their best to create happy experiences for their children. We didn’t have much when I was a child, but Mom always made sure we had some new clothes and some new toys or things that we would enjoy at Christmas. Many of my friends and neighbors would get all the newest toys or gadgets and I would sometimes be embarrassed by what I had received in comparison, but I also understood that my mother had done the best she could as a single mother raising a family of four. There was always food, light, and love in the house during the season. In every season, when I think about it.

Christmas memories are often the most happy of memories; maybe not for everyone, but for many. Part of it is that as children we don’t necessarily see as much loss as adults have seen, so there is an innocence there, and as we grow into adulthood and maturity we understand what has been lost from those memories. As the years go by there are more people missing from the holiday table and the empty places leave an emptiness in the soul. The young ones don’t understand that because it is their turn for the happy memories to be created for them. At some point in the future they, too, will  look at a Christmas tree or lights or something that reminds them of their childhood and instead of smiling because of the memory they will one year be sad because of the loss. They will cry as I did last night, wipe the tears, and hide all of that from the children at the table because, really, it is all about those young ones and creating memories for them.

Originally from Shullsburg, Wisconsin Callen Harty is the author of four books and numerous published essays, poems, and articles. His most recent book is The Stronger Pull, a memoir about coming out in a small town in Wisconsin. His first book was My Queer Life, a compilation of over 30 years worth of writing on living life as a queer man. It includes essays, poems, speeches, monologues, and more. Empty Playground: A Survivor's Story, is a memoir about surviving childhood sex abuse. His play, Invisible Boy, is a narrative with poetic elements and is also an autobiographical look as surviving child sex abuse. All are available on Amazon.com (and three of them on Kindle) or can be ordered through local bookstores, He has written almost two dozen plays and 50 monologues that have been produced. Most of them have been produced at Broom Street Theater in Madison, Wisconsin where he started as an actor, writer, and director in 1983. He served as the Artistic Director of the theater from 2005-2010. Monologues he wrote for the Wisconsin Veterans’ Museum won him awards from the Wisconsin Historical Society and the American Association of State and Local History. He has also had essays, poems, and articles published in newspapers and magazines around the country and has taken the top prize in several photo contests. His writing has appeared in Out!, James White Review, Scott Stamp Monthly, Wisconsin State Journal, and elsewhere. He has had several essays published online for Forward Seeking, Life After Hate, and The Progressive. Callen has also been a community activist for many years. He was the co-founder of Young People Caring, UW-Madison’s 10% Society, and Proud Theater. He served as the first President of Young People Caring and as the Artistic Director for Proud Theater for its first five years. He is still an adult mentor for the group. In 2003 he won OutReach’s Man of the Year award for his queer community activism. OutReach is Madison, Wisconsin’s lesbian/gay/bisexual/transgender community center. He also won a Community Shares of Wisconsin Backyard Hero award for his sex abuse survivor activism work. He has been invited to speak before many community groups, at a roundtable on queer community theater in New York City, and has emceed several events. In 2016, Wisconsin Coalition Against Sexual Assault named him their annual Courage Award winner for his activism, writing, and speaking on sexual assault.
View all posts by Callen Harty →
This entry was posted in Uncategorized and tagged adults, Benton, children, Christmas, country, Darlington, downtown, Dubuque, food, friends, Hanover, holidays, ice cream, Illinois, Irish, laughter, life, light, lights, love, Madison, memories, Mom, Monroe, mother, relatives, Scrabble, shopping, single mother, stubbornness, tears, trees, Yahtzee. Bookmark the permalink.