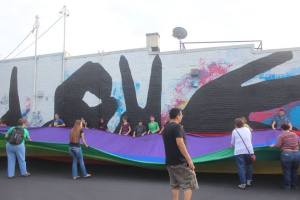 There was an ad on television a moment ago for a new series called “Spouse House”, set to premiere on July 9. The premise is that seven men and seven women will live in a house together with the idea of finding that one elusive true love. If nobody gets engaged on an episode then two of the housemates get kicked out and new potential mates get invited to join the house.

The series joins multiple other similar reality television shows such as “The Bachelor”, “The Bachelorette”, “Bachelor in Paradise”, “Married at First Sight”, “Who Wants to Marry a Multi-Millionaire”, and probably countless other knock-offs that are even more forgettable. It’s a multi-million dollar industry that pairs up people who don’t know each other and expects them to marry and live happily ever after. Because, you know, marriage is a sacred covenant.

The divorce rate in the United States is somewhere between 40 and 50 percent, meaning nearly half of all marriages end in divorce. According to the National Center for Health Statistics the marriage rate in this country per 1,000 population is 6.9 and the divorce rate is 3.2 per 1,000. Because, you know, “until death do us part”. Certainly divorce is better than a couple staying together in an unhappy and unhealthy relationship, whether it’s for the children or some other reason, but don’t preach that marriage is sacred under the eyes of God or that it’s an important social contract when the divorce rates are that high. Clearly, the idea of marriage binding a couple together on this earth and into eternity is no longer relevant.

Meanwhile, after intense pressure from right-wing constituents and conservative politicians, and fearful of not getting elected the next time around because of implied payback, the justices of the Texas State Supreme Court recently reheard a case on same-sex marriage rights that they had already dismissed. This time around they handed down a decision that attempts to undermine the U. S. Supreme Court decision that made same-sex marriage legal nationwide and also granted the same rights and benefits to same-sex married couples that opposite-sex couples enjoy. The Texas justices pretty much said that the U. S. Supreme Court decision, Obergefell v Hodges, does not apply to state spousal benefits. In the Obergefell decision the court made it clear that same-sex married couples should be accorded the “constellation of benefits” accorded to opposite-sex couples. This was further solidified on Monday of this week in a case (Pavan v Smith) about same-sex parents in Arkansas. In that case the U. S. Supreme Court reversed the Arkansas Supreme Court’s decision that the state did not have to include the same-sex partner on a birth certificate.

We can expect more of these cases coming forth, all trying to chip away at different aspects of the legality of same-sex marriage, because its opponents simply do not want to give in and admit what is now the law of the land. They are also emboldened because they have a new friend on the highest court in Trump’s appointment, Justice Neil Gorsuch. According to a Time magazine article from March 18, 2017 Gorsuch’s 2004 doctoral dissertation at Oxford University revealed that to him it was “obvious that the United States Constitution did not protect a right to same-sex marriage.” Many sources have noted that Gorsuch wrote an opinion piece in the conservative National Review a year later in which he pretty much blasted liberals for trying to advance a political agenda of same-sex marriage through the courts. Now on the Supreme Court he has already shown his true colors (and they’re not rainbow) with his dissent on Pavan v Smith. He is clearly no friend to the LGBT community or an interpretation of the Constitution that would uphold same-sex marriage.

Originally from Shullsburg, Wisconsin Callen Harty is the author of four books and numerous published essays, poems, and articles. His most recent book is The Stronger Pull, a memoir about coming out in a small town in Wisconsin. His first book was My Queer Life, a compilation of over 30 years worth of writing on living life as a queer man. It includes essays, poems, speeches, monologues, and more. Empty Playground: A Survivor's Story, is a memoir about surviving childhood sex abuse. His play, Invisible Boy, is a narrative with poetic elements and is also an autobiographical look as surviving child sex abuse. All are available on Amazon.com (and three of them on Kindle) or can be ordered through local bookstores, He has written almost two dozen plays and 50 monologues that have been produced. Most of them have been produced at Broom Street Theater in Madison, Wisconsin where he started as an actor, writer, and director in 1983. He served as the Artistic Director of the theater from 2005-2010. Monologues he wrote for the Wisconsin Veterans’ Museum won him awards from the Wisconsin Historical Society and the American Association of State and Local History. He has also had essays, poems, and articles published in newspapers and magazines around the country and has taken the top prize in several photo contests. His writing has appeared in Out!, James White Review, Scott Stamp Monthly, Wisconsin State Journal, and elsewhere. He has had several essays published online for Forward Seeking, Life After Hate, and The Progressive. Callen has also been a community activist for many years. He was the co-founder of Young People Caring, UW-Madison’s 10% Society, and Proud Theater. He served as the first President of Young People Caring and as the Artistic Director for Proud Theater for its first five years. He is still an adult mentor for the group. In 2003 he won OutReach’s Man of the Year award for his queer community activism. OutReach is Madison, Wisconsin’s lesbian/gay/bisexual/transgender community center. He also won a Community Shares of Wisconsin Backyard Hero award for his sex abuse survivor activism work. He has been invited to speak before many community groups, at a roundtable on queer community theater in New York City, and has emceed several events. In 2016, Wisconsin Coalition Against Sexual Assault named him their annual Courage Award winner for his activism, writing, and speaking on sexual assault.
View all posts by Callen Harty →
This entry was posted in Uncategorized and tagged Arkansas, Arkansas Supreme Court, Bachelor in Paradise, conservative politicians, Constitution, divorce, engaged, LGBT community, love, marriage, Married at First Sight, marry, mates, National Center for Health Statistics, National Review, Neil Gorsuch, Obergefell v Hodges, Oxford Univeristy, Pavan v Smith, right-wing, sacred covenant, same-sex marriage, same-sex parents, spousal bendits, Spouse Hous, Texas State Supreme Court, The Bachelor, The Bachelorette, Time magazine, Trump, U. S. Supreme Court, Who Wants to Marry a Multi-Millionaire. Bookmark the permalink.