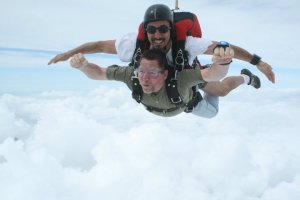 Me skydiving in the summer of 2011. Photographer unknown.

While country music is not my favorite style of music there is one crossover song that strikes me every time I hear it. It is Tim McGraw’s song, Live Like You Were Dying. Every time I hear the line, “Someday I hope you get the chance to live like you were dying” I acknowledge the truth of it in my heart. There is both hope and joy in it.

Growing up surrounded by death gives a person a different perspective on life. All of my grandparents, my father, my oldest brother, one of my uncles, and at least one of my cousins were all dead either before I knew them or had a chance to formulate any memories. My memories are photographs taken from times before I was even alive or old enough to remember. When I was just entering my teens another aunt and another uncle passed. A short time later another uncle left us. Around the same time, Etta Kelly, the old retired school teacher who was my mentor as a youth died of cancer. My cousin, Rick, died in Vietnam. The fall I graduated from high school my friend, classmate, and fellow altar boy, Ed, was killed in a car crash.

By the time I was eighteen I had experienced more death in my life than many of my friends did by the time they were thirty or forty. In addition I grew up in an Irish Catholic family, so pretty much every Sunday we were reminded that we had better be spiritually prepared for that day when we die. Every year at Ash Wednesday we received ashes on our foreheads with the priest uttering the phrase, “Remember, man, that you are dust, and into dust you shall return.”

As a result I grew up with a quiet acceptance of death. I understood at a very early age that life is fleeting, that at any moment God could pluck someone from your life and take them home. That doesn’t mean I didn’t grieve the loss. Even though I believed they were spiritually in the afterlife, they were no longer in my life and oftentimes that reality hurt a lot. But at the same time I understood that everything is tenuous, that today’s joy could turn into tomorrow’s tragedy. I understood that with everything in life so fragile a person had better appreciate what they have and live life with as much meaning as possible.

Nine years ago when I had a life-threatening heart attack I came to face-to-face with my own mortality and while the awareness was always there, having the reality of it come that close brought it to the forefront in a new way. After that experience I did do some things like the narrator of Tim McGraw’s song. I went skydiving. I flew a helicopter. I did some travelling. More importantly, I took stock of my life, what I had done with it, and what I had yet to do and I shifted some priorities and moved into some new directions as a result.

The thing is, once you accept the idea of mortality, that you and I are here for a limited time, you can do so much more with what time you have. Most of us trudge our way blindly through our lives, simply living for a paycheck to take care of ourselves and our families, but not taking the time to make the important connections, to do the important work of living and loving. Until you realize and acknowledge in a very real way that death is the inevitable end you won’t “live like you were dying.” Because, here’s the catch, once you fully realize that you are dying–that every day you are one step closer to that day nobody can predict or avoid–you can also realize that dying means that you are still living, that you still have that great gift to do with what you will.

One doesn’t have to be an old person or ill with a terminal disease to acknowledge, accept, and rejoice in the idea of death and the beauty of living. Give away your love while you can. For every bit of it you give it comes back to you tenfold and makes the living even better. Don’t wait until it’s too late. Understand that the clock started ticking the moment you were born, but it’s ticking still. There is time left to enjoy, to love, and to assure yourself that when you reach that last breath you can exhale knowing that you lived it as fully as you could and that you left more love behind you than what was there before you.

Originally from Shullsburg, Wisconsin Callen Harty is the author of four books and numerous published essays, poems, and articles. His most recent book is The Stronger Pull, a memoir about coming out in a small town in Wisconsin. His first book was My Queer Life, a compilation of over 30 years worth of writing on living life as a queer man. It includes essays, poems, speeches, monologues, and more. Empty Playground: A Survivor's Story, is a memoir about surviving childhood sex abuse. His play, Invisible Boy, is a narrative with poetic elements and is also an autobiographical look as surviving child sex abuse. All are available on Amazon.com (and three of them on Kindle) or can be ordered through local bookstores, He has written almost two dozen plays and 50 monologues that have been produced. Most of them have been produced at Broom Street Theater in Madison, Wisconsin where he started as an actor, writer, and director in 1983. He served as the Artistic Director of the theater from 2005-2010. Monologues he wrote for the Wisconsin Veterans’ Museum won him awards from the Wisconsin Historical Society and the American Association of State and Local History. He has also had essays, poems, and articles published in newspapers and magazines around the country and has taken the top prize in several photo contests. His writing has appeared in Out!, James White Review, Scott Stamp Monthly, Wisconsin State Journal, and elsewhere. He has had several essays published online for Forward Seeking, Life After Hate, and The Progressive. Callen has also been a community activist for many years. He was the co-founder of Young People Caring, UW-Madison’s 10% Society, and Proud Theater. He served as the first President of Young People Caring and as the Artistic Director for Proud Theater for its first five years. He is still an adult mentor for the group. In 2003 he won OutReach’s Man of the Year award for his queer community activism. OutReach is Madison, Wisconsin’s lesbian/gay/bisexual/transgender community center. He also won a Community Shares of Wisconsin Backyard Hero award for his sex abuse survivor activism work. He has been invited to speak before many community groups, at a roundtable on queer community theater in New York City, and has emceed several events. In 2016, Wisconsin Coalition Against Sexual Assault named him their annual Courage Award winner for his activism, writing, and speaking on sexual assault.
View all posts by Callen Harty →
This entry was posted in Uncategorized and tagged afterlife, altar boy, Ash Wednesday, aunt, brother, cancer, car crash, country music, cousin, crossover, death, Etta Kelly, family, father, gift, Godloss, grandparents, heart attack, high school, Irish-Catholic, joy, life, Live Like You Were Dying, living, love, loving, meaning, mentor, mortality, paycheck, photographs, skydiving, terminal disease, Tim McGraw, tragedy, travelling, uncle, Vietnam. Bookmark the permalink.