On Trump and Racism 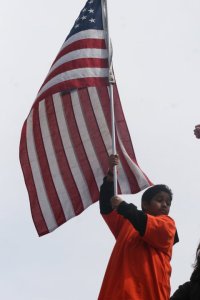 Donald Trump is a racist.

That is it. Period. Donald Trump is a racist. There should be no further discussion. It is a fact. But in this day and age there apparently are no “facts,” only “fake news,” lies, and smear campaigns. As a result, there are those who would argue against the idea that Trump is a racist. There are apologists for his behavior who will do everything they can to justify his words and twist them into something so innocent-sounding that it could be construed as treasonous to say that he is a racist. Trump himself, like all racists, denies that he is a racist.

Seemingly every day he does or says something that offends a huge swath of the world’s population. Yesterday and today newspapers, websites, Twitter, and citizens both in the United States and abroad were in an uproar over a report that on Thursday Trump described African countries and Haiti as “shithole countries,” asking why we would want immigrants from such places.

The reality is that Haiti and much of Africa and many other parts of the world are harder places to live than the United States, in large part due to years of American and European colonialism, capitalism, and exploitation. The citizens of those places may be poorer financially, but that does not make them poorer in spirit, less human, or less desirable as neighbors, co-workers, and friends. It does not mean that as immigrants they cannot contribute greatly to another nation’s economy, culture, and more. The struggling economies of the countries that Trump disparaged yesterday also makes it more understandable why they might want to and should be allowed to emigrate to the United States. Generations have come here for the dream of a better life that Lady Liberty has promised. It is why Italians, Chinese, Irish, Hmong, and others have sacrificed to come here. It is why Trump’s family came here. Regardless of Liberty’s call to “Give me your tired, your poor, your huddled masses yearning to breathe free,” Donald Trump does not want the poor or huddled masses. He does not want any more immigrants–unless they are white. This is not an exaggeration. His words betray him.

Today he denied using the word “shithole,” noting that he used “tough” language in talking about the issue, but did not use that term. Trump and his supporters are missing the point. Most people in day-to-day life use foul language on occasion, if not regularly. Presidents and other politicians swear. On the Watergate tapes Richard Nixon used the “F” word more times than most people have in their lifetimes. It is not the specific language that is the issue–though we should expect a higher level of discourse and propriety from our leaders–it is the attitude behind that language.

Whether Trump specifically used the term “shithole” does not matter. What matters is that he questioned why we would want immigrants from Africa and Haiti coming into our country. At the same time he suggested that we should allow more immigration from places like Norway, where blond-haired, blue-eyed Aryans are the norm.

Whatever equivocations and denials may be used about the specific words, what remains is that Donald Trump is a racist. This, also, is not an exaggeration.

If yesterday’s incident were the only instance in which Trump said or did something along these lines, it would still be enough for anyone who understands the insidiousness of racism to say that he is racist. However, one doesn’t need to rely solely on yesterday’s meeting. There is a long history that can be reviewed, going back to his resistance to renting his properties to African-Americans decades ago, to his view of Mexicans as rapists, to his response to the neo-Nazi marches in Charlottesville, to his desire to ban Muslim immigrants to the United States, to his descriptions of American black communities during the election, to retweeting white nationalists. This is only a partial list. There are other instances of somewhat more careful language that also hint at a racist man.

The obvious conclusion that can be drawn from Donald Trump’s actions and words is that he is a racist and a racist is not someone who should be leading the world’s melting pot. Period. His views on race and immigration cannot be supported. There is no justification for his words or his beliefs. There is no place anywhere at the table for a racist, but especially not at the head of the table. If it were my house he would not be welcome any longer.

Originally from Shullsburg, Wisconsin Callen Harty is the author of four books and numerous published essays, poems, and articles. His most recent book is The Stronger Pull, a memoir about coming out in a small town in Wisconsin. His first book was My Queer Life, a compilation of over 30 years worth of writing on living life as a queer man. It includes essays, poems, speeches, monologues, and more. Empty Playground: A Survivor's Story, is a memoir about surviving childhood sex abuse. His play, Invisible Boy, is a narrative with poetic elements and is also an autobiographical look as surviving child sex abuse. All are available on Amazon.com (and three of them on Kindle) or can be ordered through local bookstores, He has written almost two dozen plays and 50 monologues that have been produced. Most of them have been produced at Broom Street Theater in Madison, Wisconsin where he started as an actor, writer, and director in 1983. He served as the Artistic Director of the theater from 2005-2010. Monologues he wrote for the Wisconsin Veterans’ Museum won him awards from the Wisconsin Historical Society and the American Association of State and Local History. He has also had essays, poems, and articles published in newspapers and magazines around the country and has taken the top prize in several photo contests. His writing has appeared in Out!, James White Review, Scott Stamp Monthly, Wisconsin State Journal, and elsewhere. He has had several essays published online for Forward Seeking, Life After Hate, and The Progressive. Callen has also been a community activist for many years. He was the co-founder of Young People Caring, UW-Madison’s 10% Society, and Proud Theater. He served as the first President of Young People Caring and as the Artistic Director for Proud Theater for its first five years. He is still an adult mentor for the group. In 2003 he won OutReach’s Man of the Year award for his queer community activism. OutReach is Madison, Wisconsin’s lesbian/gay/bisexual/transgender community center. He also won a Community Shares of Wisconsin Backyard Hero award for his sex abuse survivor activism work. He has been invited to speak before many community groups, at a roundtable on queer community theater in New York City, and has emceed several events. In 2016, Wisconsin Coalition Against Sexual Assault named him their annual Courage Award winner for his activism, writing, and speaking on sexual assault.
View all posts by Callen Harty →
This entry was posted in Uncategorized and tagged Africa, African countries, African-Americans, America, apologists, Aryans, black communities, capitalism, Charlottesville, Chinese, co-workers, colonialism, culture, Donald Trump, economy, emigrate, Europe, exploitation, fake news, friends, Haiti, Hmong, huddled masses, human, immigrants, Irish, Italians, Lady Liberty, melting pot, Mexicans, Muslim, neighbors, neo-Nazi, newspapers, Norway, politiicians, Presidents, race, racism, racist, Richard Nixon, shithole countries, the F word, Twitter, United States, Watergate, websites, white nationalists. Bookmark the permalink.