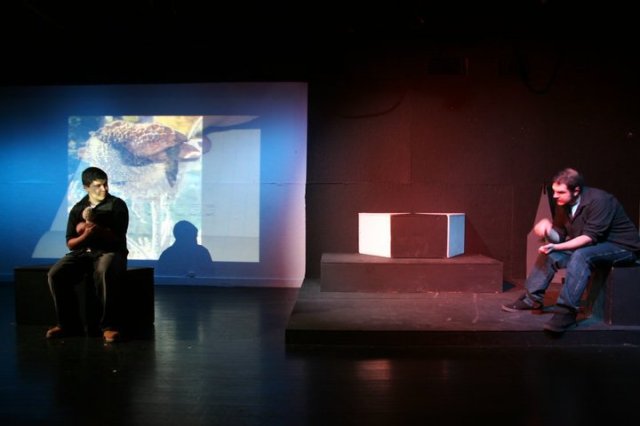 Jason (Gavin Logan) as a boy and Jason (Nick Kaprelian) as a young man contemplating his life in the play Invisible Boy. Photo by Callen Harty.

When I was living in my dorm in college one of the men at the other end of the long hall on our floor killed himself. In retrospect it was not a sudden thing. At some point before it happened he had built some kind of wooden beam from his bookshelf to his roommate’s bookshelf on the opposite side of the room, and then he waited, and one day he hung himself and nobody understood why. Kurt was a good-looking guy and well-liked, he was a good student, he was on the swim team. He seemed to have everything going for him.

So it seemed. The thing is, none of us can know what pain and what thoughts might be swirling in the head and heart of someone else.

Since that day, several people I have known have been lost to suicide, including a couple young people who had so much to offer the world, and my best friend, whose loss hurts me still.

At the time of Kurt’s death I was incredibly naïve. Everything was sunshine and roses in my world, or at least I pretended it was. In reality I was probably as depressed as he must have been. At the time I didn’t think I could ever understand anyone taking their own life. How could there be that much pain held inside? And yet, I was holding incredible pain inside me that I was not dealing with in any way, and eventually it led me to the same place. I had somehow deluded myself into pretending that pain was not there.

When I was in my twenties I tried to dull all my pain with drugs and alcohol, which of course exacerbated the depression, the pain, and the feeling that I was a worthless human being. Two times in that decade I tried to kill myself and failed, and a third and final time I came to the brink of it, but backed down. Nobody knew it. Nobody knew how much I hated myself. Nobody knew what I wanted or had tried to do. I didn’t think anyone cared for me. I didn’t trust anyone enough to talk about what I was feeling.

Several years ago I wrote a play called Invisible Boy in which the main character talked about suicide and about stepping back from that brink. I think it accurately describes how I felt at that time.

“I was dying. In many ways. Sometimes, taking a breath hurts because you know that every breath you take is that much longer in the world. I wanted to stop breathing. Jon did it. Why couldn’t I? He was abused as a child, too, turned to prostitution, alcohol, sex addiction. But he got to a point where his pain was unbearable, so he gave it away. To me, to some others. I still hold that pain for him. That’s the unfairness of suicide. I wanted to give mine away, too, but always there were angels in my world. Always there were people who took care of me at just the right moment. Lauren never did ask what had happened that night. She never intruded. She just let me be with my emotions. If there hadn’t been a light there, if she hadn’t answered, if she hadn’t been so understanding . . . well, I think that knife may have cut deeply. But that was a turning point. The other times I tried to kill myself I simply failed. This time I made a choice. Something inside me, some little part of me, perhaps that wounded child who survived everything back then, something made me stop. Some voice made me put that knife down and try to make a human connection. In the middle of a period when I trusted no one, when I was at the lowest and darkest moments of my self-abuse, when there seemed to be nothing left but despair, something made me stop. There was a little voice of hope that carried me down the hall where I saw a light beckoning and that little sliver of light saved my life. But a little light can build; it can grow to illuminate things unseen. Oh, it has taken me years, but there is so much light in my life now that I can see and feel in ways that I have not known in a long, long time. I have love now, I have a partner who cares deeply and who sits in silence when I need it, who holds me when I need holding, who doesn’t touch me when I am remembering unwanted touches, who loves all of me. I am healing. I have work to do yet, but I am putting the pieces back together. I am becoming a whole person. Now I am working on loving myself and loving that child inside me who needs protection. I promised him, way back after the last time I was molested, I promised him never again and I have the strength now to assure that promise.”

Even on that night when I last contemplated suicide, when I was so close to not only putting that knife to my wrist, but putting it through my wrist, I did not talk about what I was feeling. I went to the door of a housemate and she let me in when all I could say was “I can’t be alone right now.” Without touching me, she held me. Without either of us talking, she heard me. It was an incredible gift.

Decades later I am so thankful that Lauren was there for me in that moment. I wish that Kurt and the others I have known who went down that path had searched for and found a similar sliver of light. I hope that anyone who may be in the same place now searches until that light is found.

Originally from Shullsburg, Wisconsin Callen Harty is the author of four books and numerous published essays, poems, and articles. His most recent book is The Stronger Pull, a memoir about coming out in a small town in Wisconsin. His first book was My Queer Life, a compilation of over 30 years worth of writing on living life as a queer man. It includes essays, poems, speeches, monologues, and more. Empty Playground: A Survivor's Story, is a memoir about surviving childhood sex abuse. His play, Invisible Boy, is a narrative with poetic elements and is also an autobiographical look as surviving child sex abuse. All are available on Amazon.com (and three of them on Kindle) or can be ordered through local bookstores, He has written almost two dozen plays and 50 monologues that have been produced. Most of them have been produced at Broom Street Theater in Madison, Wisconsin where he started as an actor, writer, and director in 1983. He served as the Artistic Director of the theater from 2005-2010. Monologues he wrote for the Wisconsin Veterans’ Museum won him awards from the Wisconsin Historical Society and the American Association of State and Local History. He has also had essays, poems, and articles published in newspapers and magazines around the country and has taken the top prize in several photo contests. His writing has appeared in Out!, James White Review, Scott Stamp Monthly, Wisconsin State Journal, and elsewhere. He has had several essays published online for Forward Seeking, Life After Hate, and The Progressive. Callen has also been a community activist for many years. He was the co-founder of Young People Caring, UW-Madison’s 10% Society, and Proud Theater. He served as the first President of Young People Caring and as the Artistic Director for Proud Theater for its first five years. He is still an adult mentor for the group. In 2003 he won OutReach’s Man of the Year award for his queer community activism. OutReach is Madison, Wisconsin’s lesbian/gay/bisexual/transgender community center. He also won a Community Shares of Wisconsin Backyard Hero award for his sex abuse survivor activism work. He has been invited to speak before many community groups, at a roundtable on queer community theater in New York City, and has emceed several events. In 2016, Wisconsin Coalition Against Sexual Assault named him their annual Courage Award winner for his activism, writing, and speaking on sexual assault.
View all posts by Callen Harty →
This entry was posted in Uncategorized and tagged abused, acquaintance, alcohol, alone, angels, best friend, child, choice, crisis line volunteer, depressed, depression, despair, drugs, emotions, family member, feeling, friend, gift, healing, hope, human being, human connection, Invisible Boy, light, love, minister, molested, pain, prostitution, protection, self-abuse, sex addiction, silence, suicidal ideation, suicide, survivor, teacher, touch, trust, turning point, whole person, worthless, wounded child. Bookmark the permalink.