My heart as taken by the doctors during my heart attack. 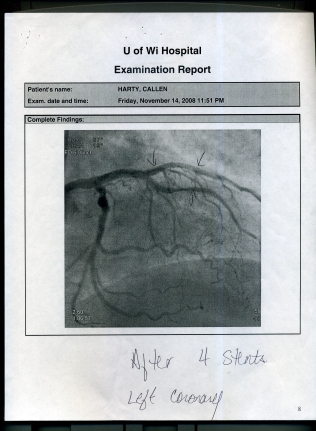 My heart after doctors put in four stents.

It has now been ten years since I was put in the back of an ambulance and rushed to the University of Wisconsin Hospital with what proved to be a 100% blockage of my left coronary. It happened in the middle of an opening night performance at Broom Street Theater, and I finished that scene and my last scene and the story made all the local newspapers. Between the theater and the hospital I was given three hits of nitroglycerin to open the blood vessels more. When I got there a social worker stopped by to ask about end-of-life issues and whether I wanted to donate body parts. I told them they probably didn’t want my liver from previous abuse, it was likely they no longer wanted my heart, that my vision and hearing were going, but that if there was anything left they could have it. They didn’t laugh.

Somehow I knew I was going to be okay that night, but it was still scary. My father died of a massive heart attack at the age of 41. I had already outlived him by ten years at that point, and twenty now, but my heart was severely damaged. The doctors told me that I had survived a life-threatening event. They put four stents in to help the blood flow better and when it was all done I was told that going forward I would be living on 60% of my heart’s capacity.

In that first year or so afterward I was a perfect patient. I joined a fitness club, lost fifty pounds, stayed on my regimen of drugs, and did everything I was told I should do. My cardiologist even noted on one visit that I was a “poster child for heart attack recovery.”

But it’s been ten years and I didn’t remain a perfect patient. I couldn’t afford to keep up the club membership, the Mediterranean diet sort of slipped through the cracks, I gained pretty much all of the weight back (although I’ve dropped twenty pounds back off again), and at some point I went off the drug regimen. I don’t have a good excuse for it. There was a moment when I needed to refill prescriptions and didn’t have the money for it. Then I justified it because of all the commercials on television that enumerate the horrendous side effects of so many drugs (including some heart medications that caused the pharmaceutical companies to be sued). And being the good Catholic boy, I was embarrassed and ashamed to contact the doctor to get going on the drugs again.

That all changed several weeks ago when I went into Urgent Care because of an ear ache and severe dizziness. It ultimately turned out that was from a couple infections, but because of the symptoms I described one of the doctors ordered an EKG and they found an irregular heartbeat and once again I was put into the back of an ambulance and raced to UW Hospital and Clinics. They kept me overnight and did blood tests, more EKGs, a stress test, and more. They indicated that things seemed okay when they released me and told me I passed the stress test, and scheduled a follow-up with my cardiologist.

What they didn’t tell me and I didn’t find out until I met with my cardiologist a couple weeks ago was that I “passed” the stress test, but that the results were not normal. He explained that I had ischemic cardiomyopathy, which essentially means that my heart is not pumping out as much blood as it should. After my heart attack it was pumping at about 41 percent (normal is about 50), but the stress test showed me averaging about 31 percent with a low at one point of 26 percent. To determine the severity of it, the doctor ordered an echocardiogram, which gives a more accurate picture. The echocardiogram is scheduled for next week. Treatment can range from a drug regimen and lifestyle change to stents to pacemakers or bypass surgery, depending on severity. Because he didn’t schedule the echocardiogram until three weeks out and our next appointment together is three months out, I figured that he’s not overly concerned about it, but it’s still a bit scary. He did get me back on the drugs to start.

The thing is I’m not a young buck anymore. I’ve outlived my father by twenty years now, but I still have those genes. The heart attack should have been warning enough about caring for my body and yes, I am feeling guilt about not continuing with my self-care the way I started. I also understand that I cannot change those choices from the past, except to be better in the future. I still have so much to do in my life and there is no guarantee no matter what I do that I will live any longer than today. There is no guarantee for any of us about life expectancy. But watching my diet, following doctor’s orders, and doing what I can to live as healthy as I can certainly improves my odds that when it is time to go I will have done what I need to do in this life, lived it as fully as I can, and leave with no regrets. So today, on this tenth anniversary, I rededicate myself to myself and to a long and healthy future.

Originally from Shullsburg, Wisconsin Callen Harty is the author of four books and numerous published essays, poems, and articles. His most recent book is The Stronger Pull, a memoir about coming out in a small town in Wisconsin. His first book was My Queer Life, a compilation of over 30 years worth of writing on living life as a queer man. It includes essays, poems, speeches, monologues, and more. Empty Playground: A Survivor's Story, is a memoir about surviving childhood sex abuse. His play, Invisible Boy, is a narrative with poetic elements and is also an autobiographical look as surviving child sex abuse. All are available on Amazon.com (and three of them on Kindle) or can be ordered through local bookstores, He has written almost two dozen plays and 50 monologues that have been produced. Most of them have been produced at Broom Street Theater in Madison, Wisconsin where he started as an actor, writer, and director in 1983. He served as the Artistic Director of the theater from 2005-2010. Monologues he wrote for the Wisconsin Veterans’ Museum won him awards from the Wisconsin Historical Society and the American Association of State and Local History. He has also had essays, poems, and articles published in newspapers and magazines around the country and has taken the top prize in several photo contests. His writing has appeared in Out!, James White Review, Scott Stamp Monthly, Wisconsin State Journal, and elsewhere. He has had several essays published online for Forward Seeking, Life After Hate, and The Progressive. Callen has also been a community activist for many years. He was the co-founder of Young People Caring, UW-Madison’s 10% Society, and Proud Theater. He served as the first President of Young People Caring and as the Artistic Director for Proud Theater for its first five years. He is still an adult mentor for the group. In 2003 he won OutReach’s Man of the Year award for his queer community activism. OutReach is Madison, Wisconsin’s lesbian/gay/bisexual/transgender community center. He also won a Community Shares of Wisconsin Backyard Hero award for his sex abuse survivor activism work. He has been invited to speak before many community groups, at a roundtable on queer community theater in New York City, and has emceed several events. In 2016, Wisconsin Coalition Against Sexual Assault named him their annual Courage Award winner for his activism, writing, and speaking on sexual assault.
View all posts by Callen Harty →
This entry was posted in Uncategorized and tagged ambulance, blockage, blood tests, blood vessels, body parts, Broom Street Theater, bypass surgery, cardiologist, Catholic, coronary, dieet, dizziness, doctor's orders, drug regimen, drugs, ear ache, echocardiogram, EKG, end-of-life, father, genes, guilt, hearing, heart, heart attack, heart medications, infections, irregular heartbeat, ischemic cardiomyopathy, life expectancy, life-threatening event, lifestyle change, liver, Mediterranean diet, nitroglycerin, opening night, pacemakers, patient, pharmaceutical companies, prescriptions, recovery, self-care, side effects, social worker, stents, stress test, symptoms, treatment, University of Wisconsin Hospital, Urgent Care, vision, weight. Bookmark the permalink.