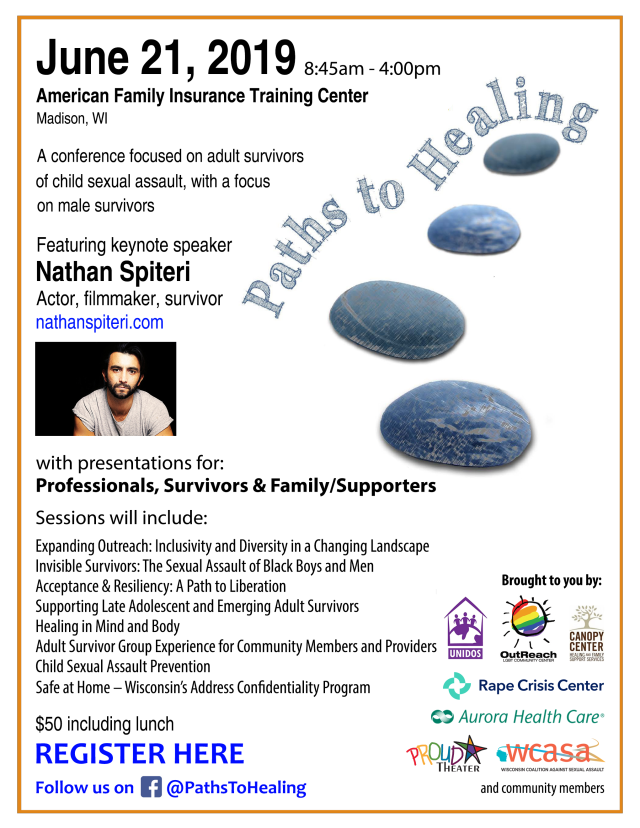 Several Wisconsin organizations have partnered for the seventh year to organize and sponsor Paths to Healing, a one-day conference on surviving child sex abuse to be held from 8:45-4:15 p.m. at the American Family Insurance Training Center on Friday, June 21.

Sponsoring organizations are Wisconsin Coalition Against Sexual Assault (WCASA), the Dane County Rape Crisis Center, UNIDOS, Aurora Health Care, Canopy Center, Proud Theater, and OutReach, with thanks to American Family for use of their facility. The day-long conference will focus on healing and survival, particularly among male survivors, an often underserved population in the sexual assault advocacy community.

Conference organizers are pleased to present Nathan Spiteri as this year’s keynote speaker. Originally from Australia, Spiteri lives in New York City where he is an actor and writer and has appeared in numerous commercials, plays, and independent films. Last fall his survivor story was featured in the Sydney Morning Herald. He has turned his story into a script which he is currently working on getting produced. He is also working with mixed media artist Melanie Jai to raise awareness of sexual assault and domestic violence through sharing their stories together.

The conference will open with socializing and networking prior to the welcome and introduction at 8:45, followed by Spiteri’s keynote address. Throughout the day there will be breakout sessions geared to professionals in the sexual assault field, sex abuse survivors, and friends and families of survivors. The conference is unique in being open to professionals, survivors, and allies.

Paths to Healing started in 2013 when survivor Callen Harty decided he wanted to bring the film, Boys and Men Healing, to Madison. After meeting with Kelly Anderson at the Rape Crisis Center, it was decided to expand into a day-long conference. The sponsoring organizations are non-profit, but organizers are committed to keeping the costs low. The cost of the conference is $50, which includes lunch.

Originally from Shullsburg, Wisconsin Callen Harty is the author of four books and numerous published essays, poems, and articles. His most recent book is The Stronger Pull, a memoir about coming out in a small town in Wisconsin. His first book was My Queer Life, a compilation of over 30 years worth of writing on living life as a queer man. It includes essays, poems, speeches, monologues, and more. Empty Playground: A Survivor's Story, is a memoir about surviving childhood sex abuse. His play, Invisible Boy, is a narrative with poetic elements and is also an autobiographical look as surviving child sex abuse. All are available on Amazon.com (and three of them on Kindle) or can be ordered through local bookstores, He has written almost two dozen plays and 50 monologues that have been produced. Most of them have been produced at Broom Street Theater in Madison, Wisconsin where he started as an actor, writer, and director in 1983. He served as the Artistic Director of the theater from 2005-2010. Monologues he wrote for the Wisconsin Veterans’ Museum won him awards from the Wisconsin Historical Society and the American Association of State and Local History. He has also had essays, poems, and articles published in newspapers and magazines around the country and has taken the top prize in several photo contests. His writing has appeared in Out!, James White Review, Scott Stamp Monthly, Wisconsin State Journal, and elsewhere. He has had several essays published online for Forward Seeking, Life After Hate, and The Progressive. Callen has also been a community activist for many years. He was the co-founder of Young People Caring, UW-Madison’s 10% Society, and Proud Theater. He served as the first President of Young People Caring and as the Artistic Director for Proud Theater for its first five years. He is still an adult mentor for the group. In 2003 he won OutReach’s Man of the Year award for his queer community activism. OutReach is Madison, Wisconsin’s lesbian/gay/bisexual/transgender community center. He also won a Community Shares of Wisconsin Backyard Hero award for his sex abuse survivor activism work. He has been invited to speak before many community groups, at a roundtable on queer community theater in New York City, and has emceed several events. In 2016, Wisconsin Coalition Against Sexual Assault named him their annual Courage Award winner for his activism, writing, and speaking on sexual assault.
View all posts by Callen Harty →
This entry was posted in Uncategorized and tagged "Boys and Men Healing", acceptance, Address Confidentiality Program, adult survivors, advocacy, allies, American Family Insurance Training Center, Aurora Health Care, black boys, Callen Harty, Canopy Center, child sex abuse, child sexual assault, diversity, domestic violence, emerging adult survivors, healing, inclusivity, Kelly Anderson, late adoescent, liberation, Madison, male survivors, Melanie Jai, Nathan Spiteri, networking, OutReach, Paths to Healing, prevention, Proud Theater, Rape Crisis Center, resiliency, Safe at Home, Sydney Morning Herald, UNIDOS, WCASA, Wisconsin, Wisconsin Coalition Against Sexual Assault. Bookmark the permalink.