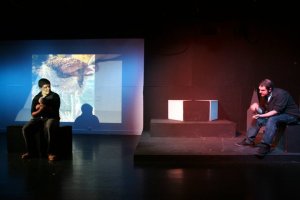 Thinking of suicide in a scene from the play, Invisible Boy. Photo by Callen Harty.

If there is one thing in my life that I failed at that I’m happy about it’s suicide. When I was younger I went through a horrible period of self-doubt, paranoia, depression, and God-only-knows what else that was affecting me. I felt unloved and unwanted and in short, I hated myself so badly that I couldn’t imagine that anyone else would care if I were alive or dead.

The thought of suicide was my constant companion. It went everywhere with me. It slept with me. It talked to me, a lot. One night I went home and took a bottle of pills out of the medicine closet, sat on my bedroom floor, and downed them. When I woke up in the light of day I could see on the bottle they were penicillin. Years later I wrote a comedic bit into a play about that experience in which the character said the following:

“Fuck. I should kill myself. I can’t do nothin’ right. Prob’ly couldn’t kill myself right either. Well, I know I can’t. Like that one time when I was all drunk and really wanted to do it and I swallowed a whole shitload a pills. Just no one told me there was penicillin in the cabinet. Fuckin’ din’t get sick for months.”

Sometimes the only way to survive is through humor.

Several months after that first attempt I came home, drunk again, and found a razor blade embedded between the wall and wooden window frame. I took it out, looked at, pondered, and ended up passing out with the blade against my wrist. That prompted the following poem:

The contemplation of suicide

The stars cry tears of light.

Tonight, the stars are my only friends.

But I must abandon their sorrow.

over the thin metal blade in my hand.

I close my eyes in fear of blood

as the metal probes my frightened wrist.

But the weapon sneaks stealthily from my hand

as my drunken body succumbs to sleep.

I awaken with a razor blade beneath my pillow.

Two attempts and two miserable failures. The third time I was on the floor of my bedroom with a large kitchen knife against my wrist when I realized I couldn’t do it. I went and knocked on the door of one of my housemates and she took me in and comforted me. That was decades ago and I have not gone back to that dark place again.

The things is, I have lived so much since that time. I have found love, I have founded organizations that have helped so many other people, I have traveled, made friends, shared so many experiences with so many wonderful people. Yes, it’s trite, but it does get better. It got better mostly when I dealt with the underlying issue–the reason I was drinking so much and the reason I no longer wanted to live. For me, it was seven and a half years of childhood sexual abuse. For others, who knows? But once those issues are faced squarely and dealt with, so many other things come into focus.

The other thing is, I have seen suicide from the other side. My best friend was lost to a drug overdose after failing at suicide a couple previous times, just as I had done. Two of the youth that we worked with in the queer youth theater group I mentored for twenty years also died at their own hands. They both had so much promise and so many people who loved and cared for them.

I have said it before and I still believe it. Suicide is not selfish as so many people say. If someone goes that far, they have thought it out, they have made a choice, and I sincerely believe that like me so many years ago, they cannot see or think clearly. It feels like the only way out of such incredible and unbearable pain. What they may not realize is how many people do love them and how many people will live the rest of their lives with a hole where their heart once resided. Perhaps if they knew that, they would understand they have so much to offer and that eventually–hopefully–this too, shall pass. I don’t ever want to lose another person in my life in this way. On this Worldwide Suicide Prevention Day (and every day), I urge anyone thinking about it to pause, reach out, and accept help wherever it may be offered. If I was able to ultimately create a meaningful life after the place where I was emotionally, then I believe anyone can. It truly can get better.

Originally from Shullsburg, Wisconsin Callen Harty is the author of four books and numerous published essays, poems, and articles. His most recent book is The Stronger Pull, a memoir about coming out in a small town in Wisconsin. His first book was My Queer Life, a compilation of over 30 years worth of writing on living life as a queer man. It includes essays, poems, speeches, monologues, and more. Empty Playground: A Survivor's Story, is a memoir about surviving childhood sex abuse. His play, Invisible Boy, is a narrative with poetic elements and is also an autobiographical look as surviving child sex abuse. All are available on Amazon.com (and three of them on Kindle) or can be ordered through local bookstores, He has written almost two dozen plays and 50 monologues that have been produced. Most of them have been produced at Broom Street Theater in Madison, Wisconsin where he started as an actor, writer, and director in 1983. He served as the Artistic Director of the theater from 2005-2010. Monologues he wrote for the Wisconsin Veterans’ Museum won him awards from the Wisconsin Historical Society and the American Association of State and Local History. He has also had essays, poems, and articles published in newspapers and magazines around the country and has taken the top prize in several photo contests. His writing has appeared in Out!, James White Review, Scott Stamp Monthly, Wisconsin State Journal, and elsewhere. He has had several essays published online for Forward Seeking, Life After Hate, and The Progressive. Callen has also been a community activist for many years. He was the co-founder of Young People Caring, UW-Madison’s 10% Society, and Proud Theater. He served as the first President of Young People Caring and as the Artistic Director for Proud Theater for its first five years. He is still an adult mentor for the group. In 2003 he won OutReach’s Man of the Year award for his queer community activism. OutReach is Madison, Wisconsin’s lesbian/gay/bisexual/transgender community center. He also won a Community Shares of Wisconsin Backyard Hero award for his sex abuse survivor activism work. He has been invited to speak before many community groups, at a roundtable on queer community theater in New York City, and has emceed several events. In 2016, Wisconsin Coalition Against Sexual Assault named him their annual Courage Award winner for his activism, writing, and speaking on sexual assault.
View all posts by Callen Harty →
This entry was posted in Uncategorized and tagged attempts, better, child sex abuse, depression, drug overdoes, drunk, heart, humor, Invisible Boy, love, meaningful life, pain, paranoia, peace, pills, razor blade, self-doubt, suicide, Suicide Awareness Day, survive, unloved, unwanted. Bookmark the permalink.