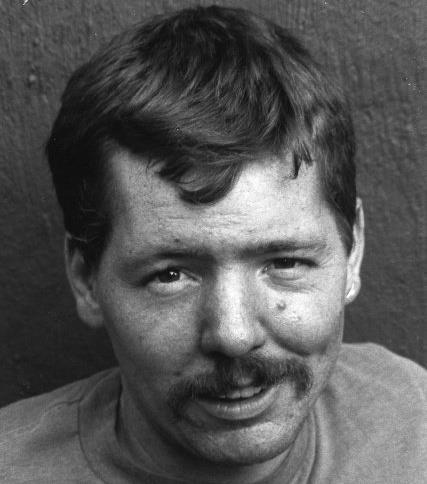 Publicity photo for my first play, Might, which opened at Broom Street Theater on July 8, 1983. Photographer unknown.

The moment I walked through the front door of Broom Street Theater the first time I felt at home. I knew it was where I belonged. For years I had enjoyed theater as an audience member and in high school had small parts in two plays. The plays that I most enjoyed watching were different in some way. Plays like Fiddler on the Roof, Barefoot in the Park, and other popular plays that companies did over and over again did not interest me as much as plays that were new and different. I didn’t understand why every theater group in the country kept going back to plays that everyone knew inside and out–what I eventually came to refer to as the McDonaldization of Theater–where you could go to any city in the country and find the same plays being produced from coast to coast. Like McDonald’s food, it tasted the same whether you were on the west or east coast, northern or southern states. My preference was always more in line with trying the local fare, whether in food or the arts, so finding and becoming a part of Broom Street Theater was a godsend for me.

At Broom Street Theater every new production was a new recipe and you never knew whether it was going to be good or bad, funny or sad (though the bulk of the theater’s history consists of outrageous comedies, often with stinging social satire). Where else could you play several parts in Hamlet: The Mini-Series or do a comedy about child sex abuse in the Catholic Church (before it became a nationwide story)? Where else could you write a gay pirate musical love story one year and a drama based on a real-life story about a judge killing an attorney another time? Where else could you watch the history of the world as told by basset hounds or a sexy comedy based on the pages of Cosmopolitan? See the life of Jesus as a western or a play about the world’s first hangwoman? Where else would you see phlegm, washing machines, and other unusual objects portrayed by actors? If I listed every play or every moment that I thoroughly enjoyed at the theater this post would be the longest post I’ve ever written. I have seen and participated in a lot in my time at the theater.

Thirty years ago today the doors opened on my first play at Broom Street Theater and to the beginning of my life in the arts. The play was Might, an original play by Bryn Magnus, and was his first play as a writer and director. He has since gone on to write many plays as a well-known Chicago and New York playwright. In it I played two parts, Joachim DeCwell and Sam Clement, a character whose life experience reflected mine so closely that in my first play I experienced a catharsis unlike any other. To this day the play remains one of my favorite projects that I’ve ever done. It was a great group of people and a wonderful experience and despite the two plays in high school was really the first time I acted.

I have honestly lost track of all the work I’ve done in the thirty years since that night. My first directing stint was as a co-director on another play by Bryn, Natural Hostages. I’ve appeared on stage hundreds upon hundreds of times in dozens of plays, primarily in Madison and in Denver, Colorado, where I lived for four years. I performed in a dozen plays in the time I was in Denver. Within a couple years of coming back to Madison I wrote my first play, Dream Quest. It did not go down in history as the greatest play ever written, but I think it was a good premise and was okay for a first effort. Since then I have written 20 or so full-length plays, not to mention monologues and one-acts and I have another one coming up in the fall called Triggered, about gun violence in America. Some of them were hugely successful in attendance and with the critics, others not so much. They all had meaning to me. I learned early on that opinions differ widely on any production and that ultimately you have to write for yourself.

Working at Broom Street Theater gave me a direction and purpose in life in a way that nothing else at that time could have, and probably saved my life by giving me that. I learned so much from my friend and mentor Joel Gersmann that I am forever grateful for his mentorship and friendship and eight years after his untimely death I still miss him dearly. I think that I was in about a dozen and a half of his plays alone, not to mention the recipient of countless lengthy phone calls to discuss Broom Street Theater, theater in general, arts, history, politics, life, and more. Joel was the most well-read person I have ever met in my life and I can’t even begin to recount how much I learned from him. I was honored to follow him as the Artistic Director of the theater the first five years after he passed away.

Broom Street Theater gave me a voice, first as an actor interpreting new characters for the first time ever, then as a director interpreting scripts, and finally as a playwright finding my own style and voice with each play I wrote, interpreting life and my vision of the world through characters I created out of the experiences of my own life and trying to do it in a universal way so that others could identify with my story and get something out of it, too. I feel that I’ve done that fairly successfully over the years. Looking back I’m amazed at the opportunity that the theater gave me. No other theatrical venue that I’ve ever heard of allows artists to create whatever they might, without censorship or prior approval required. For the thirty years I have worked there I have had absolute freedom to spread my wings and fly or fall and to learn either way, and it all started when I walked into that building thirty years ago for that first rehearsal and knew immediately that I was home. Amazingly, even as the old man of the theater now, I still feel as much at home there as anywhere else I could be.

Originally from Shullsburg, Wisconsin Callen Harty is the author of four books and numerous published essays, poems, and articles. His most recent book is The Stronger Pull, a memoir about coming out in a small town in Wisconsin. His first book was My Queer Life, a compilation of over 30 years worth of writing on living life as a queer man. It includes essays, poems, speeches, monologues, and more. Empty Playground: A Survivor's Story, is a memoir about surviving childhood sex abuse. His play, Invisible Boy, is a narrative with poetic elements and is also an autobiographical look as surviving child sex abuse. All are available on Amazon.com (and three of them on Kindle) or can be ordered through local bookstores, He has written almost two dozen plays and 50 monologues that have been produced. Most of them have been produced at Broom Street Theater in Madison, Wisconsin where he started as an actor, writer, and director in 1983. He served as the Artistic Director of the theater from 2005-2010. Monologues he wrote for the Wisconsin Veterans’ Museum won him awards from the Wisconsin Historical Society and the American Association of State and Local History. He has also had essays, poems, and articles published in newspapers and magazines around the country and has taken the top prize in several photo contests. His writing has appeared in Out!, James White Review, Scott Stamp Monthly, Wisconsin State Journal, and elsewhere. He has had several essays published online for Forward Seeking, Life After Hate, and The Progressive. Callen has also been a community activist for many years. He was the co-founder of Young People Caring, UW-Madison’s 10% Society, and Proud Theater. He served as the first President of Young People Caring and as the Artistic Director for Proud Theater for its first five years. He is still an adult mentor for the group. In 2003 he won OutReach’s Man of the Year award for his queer community activism. OutReach is Madison, Wisconsin’s lesbian/gay/bisexual/transgender community center. He also won a Community Shares of Wisconsin Backyard Hero award for his sex abuse survivor activism work. He has been invited to speak before many community groups, at a roundtable on queer community theater in New York City, and has emceed several events. In 2016, Wisconsin Coalition Against Sexual Assault named him their annual Courage Award winner for his activism, writing, and speaking on sexual assault.
View all posts by Callen Harty →
This entry was posted in Uncategorized and tagged acting, Artistic Director, arts, Barefoot in the Park, basset hounds, Broom Street Theater, Bryn Magnus, catharsis, child sex abuse, Cosmopolitan, Denver, directing, Dream Quest, Fiddler on the Roof, gay pirate musical, gun violence, Hamlet, hangwoman, Jesus, Joachim Decwell, Joel Gersmann, Madison, Might, Natural Hostages, plays, playwright, Sam Clement, satire, theater, Triggered, writing. Bookmark the permalink.

2 Responses to Thirty Years at Home