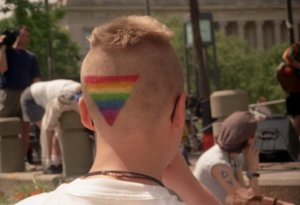 Rainbow Triangle. At a pride event in Madison, Wisconsin, 1998. Photo by Callen Harty.

The last few days have brought some really great news for queer America, but it has to be tempered with the reality of living life as a gay man–or lesbian, bi, trans, or other alternative orientations and ways to express gender. This is not the America of the 1950s when gay men could be arrested for gathering even in small groups. It is a country where progress is being made in the realm of acceptance, but where there are still many haters. Still, when good things happen it’s nice to appreciate them and realize how far we’ve come, even though we have much farther to go still.

The Good News: After seventeen years it appears that ENDA (the Employment Non-Discrimination Act) that prohibits employment discrimination based on orientation and gender expression is finally going to pass the Senate.
The Reality Check: House Speaker John Boehner has made it clear that he is not going to allow the bill to be voted on in the House of Representatives.
The Outlook: While it may not get to the House this session the momentum keeps building for queer rights. Slowly and steadily, but we do keep moving forward. Wisconsin passed the nation’s first gay rights law which banned discrimination against lesbians and gays in housing, employment, and public accommodations. The bill was introduced by David Clarenbach all the way back in 1982, which means it has been more than thirty years from the first law outlawing discrimination against queer people and we’re still not there. It’s coming, but we’re not there yet.

The Good News: For the first time ever a poll in Wisconsin by Marquette University Law School on October 29 showed a majority of the state (53%) favoring gay marriage.
The Reality Check: Wisconsin passed one of the nation’s most regressive Constitutional amendments prohibiting same-sex marriage (or anything substantially similar) back in 2006.
The Outlook: Wisconsin could be one of the last states to okay marriage equality, but it will eventually happen. Unless the United States Supreme Court overturns one of the state’s laws and forces Wisconsin to abandon its amendment it will take two consecutive legislative sessions to overturn the current amendment and then the people of the state have to vote to overturn it as well (and the wording must be exact in both sessions). That means it will likely be years before marriage equality comes to Wisconsin. Still, all the polls nationwide and now in Wisconsin show the population growing more and more accepting of the idea. It will come to pass.

The Good News: The military is accepting its queer soldiers in ways it never has before. Don’t Ask, Don’t Tell was abandoned, Defense Secretary Chuck Hagel in the last week spoke out sharply against states that are not following Pentagon guidelines on supplying identification to partners of military personnel, and this past weekend two West Point graduates became the first gay couple to be married at the prestigious military academy.
The Reality Check: There is still a lot of resistance against gays in the military and some likely face homophobic attacks despite the military’s new-found acceptance of its lesbian and gay soldiers.
The Outlook: There was resistance half a century ago when the military was integrated, but eventually it became a non-issue. Soldiers are taught to follow orders and if the high command says that LGBT soldiers must not only be tolerated, but accepted and treated as equals then eventually the men and women on the front lines will have to accept the reality.

The Good News: The Illinois House and Senate today both passed a marriage equality bill, which just needs to be signed by the Governor to become law. Governor Pat Quinn has already said he will sign the bill–in fact he encouraged its passage–so the bill is destined to become law with same-sex marriages taking place as early as June of 2014. Illinois will be the 15th state, along with the District of Columbia, to allow same-sex marriages.
The Reality Check: If fifteen states have marriage equality that means thirty-five of them still don’t. There is confusion about what happens with marriage from state to state and some states even have laws that could punish their citizens for going to another state to marry and then returning and trying to claim joint filing status for taxes.
The Outlook: As noted before all polling indicates a huge shift in public sentiment on the issue. It is clear that sooner or later marriage equality will be reality nationwide, as it is in quite a few countries around the world. However, other countries, such as Uganda, keep trying to pass bills that would criminalize homosexuality and allow for capital punishment of those found guilty of homosexual behavior. Russia recently passed a bill that is chilling in its effect that makes it a crime for anyone to promote homosexuality to minors, so anyone advocating for queer rights publicly could be said to be promoting it to minors and arrested.

While there is much happening that is good for queer America there are still hateful people out there pushing to deny us rights, including life, liberty, and the pursuit of happiness. Although much progress has been made we are not in a post-homophobic America any more than we are in a post-racial America. Anyone who believes we are is delusional. Those of us who have been fighting for years for equality for all can revel in the progress, but we must stay alert and continue fighting if we expect that progress to last. We have come far just in my lifetime, but my life will likely not be long enough to witness true equality. Still, I will fight to the end for just that, and it can be incredible to see the milestones being created as we march toward that goal.

Originally from Shullsburg, Wisconsin Callen Harty is the author of four books and numerous published essays, poems, and articles. His most recent book is The Stronger Pull, a memoir about coming out in a small town in Wisconsin. His first book was My Queer Life, a compilation of over 30 years worth of writing on living life as a queer man. It includes essays, poems, speeches, monologues, and more. Empty Playground: A Survivor's Story, is a memoir about surviving childhood sex abuse. His play, Invisible Boy, is a narrative with poetic elements and is also an autobiographical look as surviving child sex abuse. All are available on Amazon.com (and three of them on Kindle) or can be ordered through local bookstores, He has written almost two dozen plays and 50 monologues that have been produced. Most of them have been produced at Broom Street Theater in Madison, Wisconsin where he started as an actor, writer, and director in 1983. He served as the Artistic Director of the theater from 2005-2010. Monologues he wrote for the Wisconsin Veterans’ Museum won him awards from the Wisconsin Historical Society and the American Association of State and Local History. He has also had essays, poems, and articles published in newspapers and magazines around the country and has taken the top prize in several photo contests. His writing has appeared in Out!, James White Review, Scott Stamp Monthly, Wisconsin State Journal, and elsewhere. He has had several essays published online for Forward Seeking, Life After Hate, and The Progressive. Callen has also been a community activist for many years. He was the co-founder of Young People Caring, UW-Madison’s 10% Society, and Proud Theater. He served as the first President of Young People Caring and as the Artistic Director for Proud Theater for its first five years. He is still an adult mentor for the group. In 2003 he won OutReach’s Man of the Year award for his queer community activism. OutReach is Madison, Wisconsin’s lesbian/gay/bisexual/transgender community center. He also won a Community Shares of Wisconsin Backyard Hero award for his sex abuse survivor activism work. He has been invited to speak before many community groups, at a roundtable on queer community theater in New York City, and has emceed several events. In 2016, Wisconsin Coalition Against Sexual Assault named him their annual Courage Award winner for his activism, writing, and speaking on sexual assault.
View all posts by Callen Harty →
This entry was posted in Uncategorized and tagged bi, Chuck Hagel, Constitutional amendment, David Clarenbach, District of Columbia, Don't Ask Don't Tell, employment discrimination, Employment Non-Discrimination Act, ENDA, gay, gay marriage, gay rights, gender, gender expression, House of Representatives, Illinois, integration, John Boehner, lesbian, LGBT, Marquette University Law School, marriage equality, military, orientation, Pat Quinn, Pentagon, post-homophobic America, post-racial America, queer America, Russia, same-sex marriage, Senate, Supreme Court, trans, Uganda, West Point, Wisconsin. Bookmark the permalink.