On the Milwaukee Riot 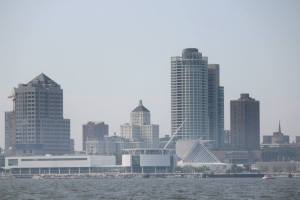 Anyone who has known me for a long time knows that I have been a pacifist since I was a child. I have stopped fights, marched for peace, and have done what little I can to make this a more peaceful world. I believe that violence and war are not the answer. Yet that doesn’t mean that I can’t understand the backdrop for a violent eruption and even sympathize with it while at the same time wishing that there had been a more peaceful way. This is what I am feeling about Milwaukee this morning.

Yesterday afternoon a police officer shot and killed yet another young black man. There have  been conflicting reports about it. Some have said he was unarmed; others that he had a weapon with more than a hundred rounds. One report said he was shot in the chest and the arm; another that he was shot several times in the back. The police reported that he pointed the gun at the officer. Area residents say he did not. It could take weeks for the full story to be revealed. But what is glaringly obvious is that Milwaukee’s north side has been a tinderbox for quite some time.

Oddly enough I have been thinking about A Christmas Story this morning, the movie that is replayed endlessly during the holiday season. And there is a reason for that coming into my mind today. Think about the movie and remember that Ralphie and his friends are constantly harassed and bullied by two of the neighborhood punks throughout the early portion of the film. At one point Ralphie has had enough and fights back, tearing into the biggest bully with all his might, mercilessly beating him in a violent rage, swearing, slugging the other kid relentlessly, until his mother arrives and pulls him off the other boy. He didn’t have any concern about what might happen to him by fighting back–he just blew. And the reason he blew is because the constant abuse of he and his buddies had been accumulating pain in him. He also was having other issues in his young life, thinking that his one great desire for a Christmas present was being undermined by everyone. So there came a point when logic failed him and emotion took over and he fought back, because it was all he had left to do.

Most people watching that movie probably cheered for Ralphie in that moment. He was the underdog, the one constantly being bullied. Despite my pacifism I understood his rage and understood why in that moment it was the only action he could take. I might have wished that he had found a different way to resolve it, but I understood the path he took.

I think also about the Stonewall Rebellion in New York City in 1969. It was several nights of riots that were considered the catalyst for the modern gay rights movement. Queer people celebrate those riots as the beginning of our liberation. We don’t look at it and say, “Oh, those people shouldn’t have destroyed their own bar and neighborhood. They shouldn’t have rioted.” Instead, we celebrate it because we understand that the riots were the result of the accumulation of atrocities against the LGBT community. The people in the bar the night it started, mostly drag queens and minority queer folk, were tired of police raids and harassment. They were tired of Mafia-run bars overcharging them because nobody else would serve them. They were tired of the taunts of other citizens and oppressive laws that kept them from full freedom in a country that promises freedom for all. Stonewall was the tinderbox that lit up the movement for queer rights. Perhaps the movement would have happened without it, but Stonewall hastened it. But understand that nobody there planned it as a political act. It was an emotional reaction to being harassed and bullied and being treated unfairly.

Our own American revolution was a violent reaction to taxation without representation and other slights by the King of England. The Declaration of Independence includes a laundry list of the harms inflicted by the mother country and makes it clear that the citizens of the colonies were not willing to be bullied anymore.

And so we have Milwaukee and countless other cities across the country exploding into protests and riots, not because of a single instance of police aggression, but because of an accumulation of racism, unfairness, and harassment that has been allowed to fester with no real attempt at looking at the underlying issues and resolving them. One more young black man killed by police and the tinderbox goes off. It is an emotional reaction, just like Ralphie and just like the queer folk at Stonewall. While I hate to see the riots and violence I understand the underlying issues and accumulated injustices that cause a people to explode in rage.

There is much underlying the riot that occurred last night. According to multiple sources Milwaukee is the most segregated city in the United States. Unemployment in the city is about 5.6% overall, but for blacks it is closer to 20%. Wisconsin also has the highest incarceration rate for African-Americans in the country, and the highest educational disparity between black and white populations. A February 8, 2016 piece on PBS listed the following disparities in Milwaukee:

This list doesn’t take into account the daily harassment by police officers in Milwaukee  with citizens being questioned about what they’re doing out and about, cars pulled over for DWB–driving while black, other recent police killings of black men nationally as well as local incidents such as the killing of Dontre Hamilton, Derek Williams, and more recently Jay Anderson in nearby Wauwatosa. This does not mean that all police are evil and out to kill black citizens, but there is enough of a history for the black community to fear the police rather than trust them. White folks generally can trust the police and believe they are there to serve and protect. That is part of what white privilege is about. Black folks don’t feel the same because of their experiences and history with the police. When more than half the black men your age have served time, flashing red lights are not the most welcome sight in the world.

Many people turn to Martin Luther King, Jr. at times like these in order to pontificate about the rioters. They’ll quote the spiritual practitioner of non-violence in an attempt to shame the rioters. And he did say that violence begets violence. He did promote peace. He did say “We must not use violence.” He understood how the use of violence could be used against the cause for racial justice. But he also understood human emotions and knew that at times when people are pushed too far and too hard that they will rise up. It is all they have left. He also said this:

“But it is not enough for me to stand before you tonight and condemn riots. It would be morally irresponsible for me to do that without, at the same time, condemning the contingent, intolerable conditions that exist in our society. These conditions are the things that cause individuals to feel that they have no other alternative than to engage in violent rebellions to get attention. And I must say tonight that a riot is the language of the unheard.”

A riot is the language of the unheard.

The point is that the riot in Milwaukee last night did not come out of nowhere. A hundred or two hundred citizens lashed out emotionally at yet another perceived injustice. They have not been heard. They have raised their voices to deaf ears. They are seeking to be heard. Don’t ask why they set fire to buildings in their own neighborhood, but instead ask why they were angry enough to do that in the first place. Then get to work at listening to the answers to that question and working together to resolve those issues.

Originally from Shullsburg, Wisconsin Callen Harty is the author of four books and numerous published essays, poems, and articles. His most recent book is The Stronger Pull, a memoir about coming out in a small town in Wisconsin. His first book was My Queer Life, a compilation of over 30 years worth of writing on living life as a queer man. It includes essays, poems, speeches, monologues, and more. Empty Playground: A Survivor's Story, is a memoir about surviving childhood sex abuse. His play, Invisible Boy, is a narrative with poetic elements and is also an autobiographical look as surviving child sex abuse. All are available on Amazon.com (and three of them on Kindle) or can be ordered through local bookstores, He has written almost two dozen plays and 50 monologues that have been produced. Most of them have been produced at Broom Street Theater in Madison, Wisconsin where he started as an actor, writer, and director in 1983. He served as the Artistic Director of the theater from 2005-2010. Monologues he wrote for the Wisconsin Veterans’ Museum won him awards from the Wisconsin Historical Society and the American Association of State and Local History. He has also had essays, poems, and articles published in newspapers and magazines around the country and has taken the top prize in several photo contests. His writing has appeared in Out!, James White Review, Scott Stamp Monthly, Wisconsin State Journal, and elsewhere. He has had several essays published online for Forward Seeking, Life After Hate, and The Progressive. Callen has also been a community activist for many years. He was the co-founder of Young People Caring, UW-Madison’s 10% Society, and Proud Theater. He served as the first President of Young People Caring and as the Artistic Director for Proud Theater for its first five years. He is still an adult mentor for the group. In 2003 he won OutReach’s Man of the Year award for his queer community activism. OutReach is Madison, Wisconsin’s lesbian/gay/bisexual/transgender community center. He also won a Community Shares of Wisconsin Backyard Hero award for his sex abuse survivor activism work. He has been invited to speak before many community groups, at a roundtable on queer community theater in New York City, and has emceed several events. In 2016, Wisconsin Coalition Against Sexual Assault named him their annual Courage Award winner for his activism, writing, and speaking on sexual assault.
View all posts by Callen Harty →
This entry was posted in Uncategorized and tagged A Christmas Story, abuse, achievement gap, African-Americans, American revolution, black man, bullying, colonies, Declaration of Independence, Derek Williams, Dontre Hamilton, drag queens, Driving while Black, DWB, educational disparity, emotion, fear, freedom, gay rights, harassment, incarceration rate, injustice, Jay Anderson, King of England, LGBT community, liberation, logic, Mafia, Martin Luther King Jr., Milwaukee, minority queer folk, New York City, oppressive laws, pacifist, PBS, peace, police, police aggression, police raids, political act, poverty, protests, queer, racial justice, racism, Ralphie, riot, segregation, Stonewall Rebellion, taxation without representation, trust, underdog, unemployment, unfairness, unheard, United States, violence, war, Wauwatosa, White folks, white privilege, Wisconsin. Bookmark the permalink.