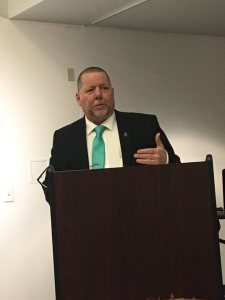 Speaking at the Nohr Gallery, UW-Platteville, 4/12/17. Photo by Darlene Masters.

Trigger Warning: This post is about child sex abuse and also suicide. Please take care of yourself first and foremost.

Since coming out publicly as a survivor of child sex abuse about seven years ago I have written articles, blog posts, a play, and a memoir, spoken at conferences and events around the state and even as far afield as MaleSurvivor’s 14th International Conference in New Jersey, and have been interviewed on radio and television. For me it is important to speak about my experience so that others know they are not alone and to educate the public. I believe that as a society we don’t talk enough about sexual assault and about how to end it. I also believe that without survivors sharing their personal stories it is too easy to see it as a distant problem. Regardless of the issue–sexual abuse or other–personal stories tend to lead to a better understanding through the connection with the human being sharing the story. Whenever I am asked to speak I do my best to accept the invitation and tell my story.

Recently I was invited by the Dean of Students Office, Family Advocates, University Counseling Services, and the Doyle Center to speak at the University of Wisconsin-Platteville this past week as part of their Sexual Assault Awareness Month activities. I was excited by the prospect and more nervous than I had ever been about a speaking engagement, primarily because I had lived in Platteville for several years and it was only twenty miles from my hometown where the bulk of the abuse took place. It was also the city where I came out as a gay man, where I toyed with suicide two different times, where I confronted the person who abused me as a child, where I turned to alcohol in a very heavy way to mask my pain and avoid confronting the truth of my life.

To be honest Platteville in 1979 was a horrible place to come out, but it was also the place where I accepted myself and first started speaking publicly. My gay friends and I belonged to the campus gay and lesbian group and we would go into classrooms and talk about what it meant to be gay and do question-and-answer sessions. Speaking at the university this week was like coming full circle, but it was also like a bullied kid going back to the junior high where all the bullying took place decades earlier. Time had passed, but place can hold memories. In fact the room in which I spoke was on a corner where almost forty years ago a carload of college students had stopped their car and yelled “faggot” and other obscenities as they threw empty beer bottles at me.

Not many blocks away was the house where I lived when I downed a bunch of pills, only to find out the next morning that it was a bottle of penicillin, a story I usually share with some humor in my presentations. It was in the same house that I held a rusty razor blade to my wrist and ended up passing out before doing anything with it. On Tuesday afternoon I walked by the bars where I used to get drunk night after night, all with different names now, but all recognizable as my old haunts. It was in one of those bars that I confronted the person who abused me and was told by him that I was the one who wanted it.

The night before my talk I had gone to my hometown and stayed overnight in the bedroom in which I grew up. It was there and in other rooms in that house, and especially in the dark basement, that most of the abuse took place from the time I was ten until I was almost eighteen. When I went downstairs to take a shower I was thrown back to those days. I didn’t know how I would handle the speech that night, whether I could shake off all the memories that came with that part of the state.

Still, I knew I wanted to speak at the university. I knew that I had to and that it was important for me and my growth and continued healing to do it. What I also realized was that when I speak or write about my story it is really not about the victimization–it is about the healing and the surviving. Yes, the memories were there. Yes, there is still lingering pain from my childhood. Yes, speaking in Platteville was like going back in time to some very hard things. But I am a survivor first and foremost. I wanted to let people know that despite the horror I suffered in my childhood I survived. I am a strong man with an important message, and so I would speak. I would share the pain of my childhood, the difficulty in overcoming it, and I would let others know that surviving sex abuse is possible and real.

I was nervous thinking about the presentation beforehand, but once I started speaking that nervousness went away and I simply shared my story. Those in attendance listened attentively and asked good questions at the end. Many of them thanked me for sharing my story. I breathed a sigh of relief and relaxed, ready for the next invitation.

Originally from Shullsburg, Wisconsin Callen Harty is the author of four books and numerous published essays, poems, and articles. His most recent book is The Stronger Pull, a memoir about coming out in a small town in Wisconsin. His first book was My Queer Life, a compilation of over 30 years worth of writing on living life as a queer man. It includes essays, poems, speeches, monologues, and more. Empty Playground: A Survivor's Story, is a memoir about surviving childhood sex abuse. His play, Invisible Boy, is a narrative with poetic elements and is also an autobiographical look as surviving child sex abuse. All are available on Amazon.com (and three of them on Kindle) or can be ordered through local bookstores, He has written almost two dozen plays and 50 monologues that have been produced. Most of them have been produced at Broom Street Theater in Madison, Wisconsin where he started as an actor, writer, and director in 1983. He served as the Artistic Director of the theater from 2005-2010. Monologues he wrote for the Wisconsin Veterans’ Museum won him awards from the Wisconsin Historical Society and the American Association of State and Local History. He has also had essays, poems, and articles published in newspapers and magazines around the country and has taken the top prize in several photo contests. His writing has appeared in Out!, James White Review, Scott Stamp Monthly, Wisconsin State Journal, and elsewhere. He has had several essays published online for Forward Seeking, Life After Hate, and The Progressive. Callen has also been a community activist for many years. He was the co-founder of Young People Caring, UW-Madison’s 10% Society, and Proud Theater. He served as the first President of Young People Caring and as the Artistic Director for Proud Theater for its first five years. He is still an adult mentor for the group. In 2003 he won OutReach’s Man of the Year award for his queer community activism. OutReach is Madison, Wisconsin’s lesbian/gay/bisexual/transgender community center. He also won a Community Shares of Wisconsin Backyard Hero award for his sex abuse survivor activism work. He has been invited to speak before many community groups, at a roundtable on queer community theater in New York City, and has emceed several events. In 2016, Wisconsin Coalition Against Sexual Assault named him their annual Courage Award winner for his activism, writing, and speaking on sexual assault.
View all posts by Callen Harty →
This entry was posted in Uncategorized and tagged abuse, alcohol, child sex abuse, come out, Doyle Center, Family Advocates, gay, MaleSurvivor, memories, New Jersey, Platteville, sexual assault, Sexual Assault Awareness Month, suicide, survivor, UW-Platteville, UW-Platteville Counseling Services, UW-Platteville Dean of Students. Bookmark the permalink.